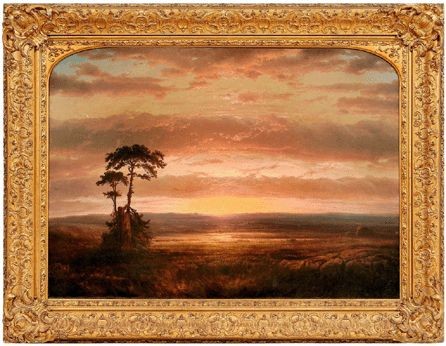 The Brunk Auction sale, which took place in early January in Asheville, NC, and specializes in antiques and art, reported that Charleston was the leader of the pack in high-end sales.

This is one of those events that seem woefully out of touch with the rest of the world. I mean, who are these people? Why are we talking about them? And why should you care, especially when pretty much everything else in the media is describing our cratering economy.

Nonetheless, the auction's top dog was "Solitude or Sunset," an oil painting by Louis Remy Mignot, a renowned 19th Century Charleston artist. The bidding for the painting opened at $80,000 and eventually sold, to an agent for a private collector, for $299,000.

Up for grabs alongside the Mignot was an elegant secretary bookcase, a piece featured in the book, "The Furniture of Charleston, 1680 to 1820." It sold for $28,750.

From an article on Antiques and the Arts Online:

Charleston, S.C., played all the leading roles at Brunk Auctions' January 3 and 4 sale. No other locale represented in this 977-lot sale came close to the prices on paintings and furniture that originated in the historic capital of Southern antiquities.

One of the sale's most exciting moments occurred when a watercolor attributed to Thomas Moran came up for sale. Brunk went with an attribution because there was some concern about where Moran was in 1873, the date included with a signature was on the painting's lower right. "The quality was certainly good enough to be a Moran," said Andrew Brunk, owner. The painting, which left its conservative estimate of $500/1,000 far behind, finished at $27,600.

During the 1940s, a Charleston businessman, Adolph G. Hollings, worked in Tehran, Iran, as purchasing agent for American Orient Corporation, a carpet importer. Five carpets from his personal collection crossed the block. The highlights of the collection were two matching fine Kashan rugs, 4½ feet by 6 feet 10 inches, with elaborate central medallions. They sold separately for $5,980 and $5,290.

All that money going around. It's enough to make you wonder.

The collectors casing these joints have got to be feeling the economy's pinch, just like us. But from their standpoint, a skittish market means lower prices, and new opportunities.

Even though the Mignot fetched nearly 300 grand, imagine what it would have gone for if things were on the up and up.

Yeah, if you've got the means, maybe now's a good time to acquire a couple new masterpieces.

If you don't, well, it's more bad news, more of the same.

But I'm bored reading about layoffs, buyouts, salary caps and job losses. Of course it's important. And of course I care. You have to wonder, though, how much the media is affecting consumer confidence.

If only for a moment, let's pretend we're highfalutin art collectors.