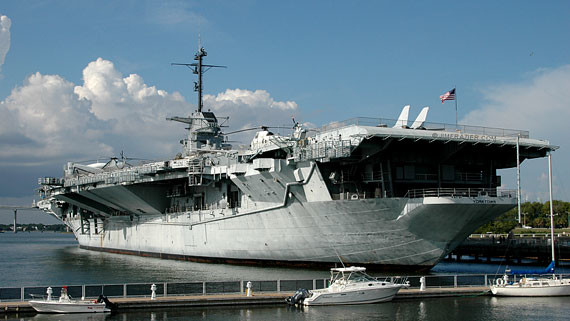 Update June 1: Burger has added another column, this time asking for community suggestions.

By all means, let The Post and Courier know, but remember you'll be going through a filter. To get the most bang for your opinion, contact Patriots Point directly.

Ken Burger from The Post and Courier thinks that perhaps it's time to consider a proper burial at sea for the aircraft carrier Yorktown and the failing fleet that makes up the popular exhibit at Patriots Point.

Read more stories on this subject in our Patriots Point topic page.With the recent $64 million estimate on renovation costs for the four warships, and the aging veterans that return once a year to repair the ships they once called home, maybe it is time to think about what's next.

For more on what could be next for aircraft carrier Yorktown, the destroyer Laffey, the submarine Clamagore and the Coast Guard cutter Ingham, check out Burger's article.

Also worth noting is that the attraction recently had to do a round of layoffs, but is hoping to get thing going with a $400,000 advertising campaign.