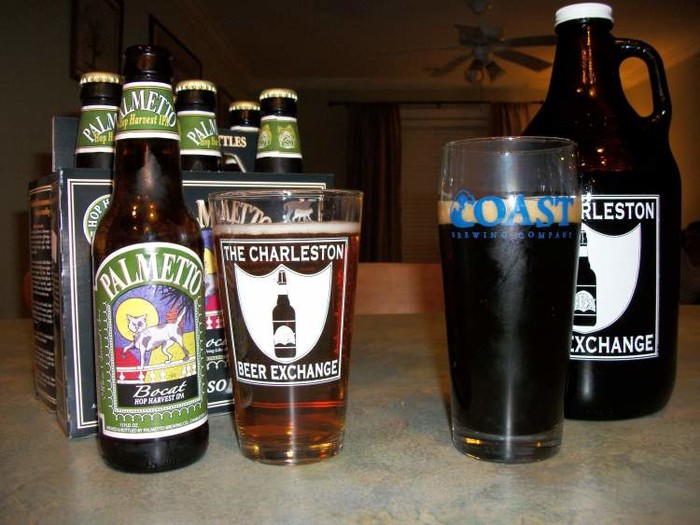 Downtown's Palmetto Brewing Company and North Charleston's COAST Brewing both have a fall seasonal offering this year. While they may be stylistically diverse, the beers have two things in common: they're both local, and both delicious.

Palmetto is the granddaddy of Lowcountry breweries, tucked away on Huger Street for years making their four year-round brews, and generally not making waves. But it seems the local craft beer boom over the last few years has inspired some innovation. They started their Bo'Cat line of seasonal beers last year, brewing Chocolate Bock and Watermelon Wheat. While an expanded selection is always good, especially from a brewery that by all accounts was stuck in a rut, those two didn't do too terribly much for me.

In walks Hop Harvest IPA, their newest addition to the Bo'Cat line - Palmetto's first wet hop ale, and the first of its kind commercially brewed in Charleston.  This style is extremely limited, as a select few hops are set aside from annual harvests for use in these brews, but they have to go from vine to kettle within about a day to avoid spoilage.  The result is a beautiful thing, as wet hops impart a much more grassy and fresh quality to beer than their dried counterparts.

Hop Harvest IPA is no exception to this.  It's a great fresh hop beer, and easily the best thing I've ever tasted from Palmetto.  The Cascade, Centennial, and Simcoe hops shine in both the nose and the flavor in their full, grassy, resinous glory.  It's renewed my hope for the brewery's future endeavors, and put yet another variety of wet hop beer in my fridge.  You should be able to find it at Palmetto purveyors everywhere, and you can find the brewery at 289 Huger Street.

Unlike Palmetto, COAST Brewing is no stranger to seasonals.  While HopArt IPA and 32/50 Kolsch remain their year-round stalwarts, they have brewed well over a dozen different seasonal beers and one-offs since their inception in 2007.  But before Boy King, The Belafonte, Red Legs, and all the others, there was their first seasonal beer: Rye Knot Brown Ale.

The fact that Rye Knot Brown remains a staple seasonal beer is a testament to how much COAST digs it, if not how objectively good it is.  The key ingredient here is chocolate malt (a variety of roasted malt, no actual Hershey's involved), as highlighted by the brewery's description:

As you can see in the picture above, this puppy pours a dark, nearly opaque brown.  While the rye character is present in the aroma, it takes a backseat to the roast, and eventually to the mild chocolate flavor.  This is a brown ale for lovers of the style, as its deep malt backbone is more intense than most, and the beer favors this to any hoppy bite.  It weighs in at 6.2% ABV, and previous editions have earned it an A from BeerAdvocate and a 75 from Ratebeer.

Rye Knot Brown is available for growler fills directly from COAST during tour hours (4 p.m. to 7 p.m. Thursdays, 11 a.m. to 2 p.m. Saturdays), at 1250 N 2nd Street in North Charleston. An unknown amount will make it into bottles soon as well.  Look out for it at regular COAST purveyors soon, if not now.