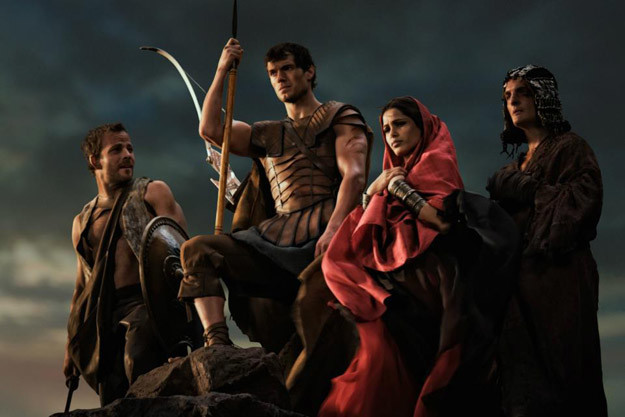 Gods, heroes, oracles, villains and a magical bow straight out of Saturday morning cartoons. Draped in allusions to the 2006 masterpiece of stylized Greek heroism, 300, Immortals had all the aspirations of an exciting mythic adventure.

Unfortunately, the only thing mythic about Immortals will be how fast it is forgotten.

There is nothing good to say about this movie. It attacks the myth of Theseus (Henry Cavill) with only a vague third grade knowledge of Greek mythology. Admittedly, you should expect historic (or mythological) accuracy out of a movie, but Immortals seems to take an extra effort to blur the lines between how the tales of Theseus might have really happened and what the gods were doing to help or hinder him.

For example, Theseus fights the minotaur in a labyrinth, but instead of a mythical beast, it is a brutish warrior in a helmet that looks like a bulls head. Meanwhile, the gods…well, at least four of them…are caught between wanting the help Theseus and not interfering in the mortal world, as Zeus (Luke Evans) has ordered. Zeus’ decree puts everyone—god and mortal—at risk because King Hyperion (Mickey Rourke) is seeking to free the Titans.

The Titans are a dozen or so of blue skinned fiends, and other than being imprisoned by the gods after a war in the heavens, bear no resemblance to Kronos, father of Zeus, and the other pre-Olympian gods of mythology. However, the same apocalyptic, destroy-the-world-if-they-are-released trope follows them, even if its forgotten by the end of the film.

The fight scenes are dull with the most exciting of them being stolen straight out of 300. Since the gods and some magic shows up, there is a little effort to put in some pizzazz into the film, but it falls short. The magical bow with sparkling, explosive arrows is used only three times in the film, and never really with any excitement. It could have been a magical key or locket and it wouldn’t have made a difference in the film.

In lieu of exciting fight scenes, the director decided that the audience would be more entertained by the horrific tortures and brutal disfigurements inflicted by the villainous Hyperion. He was wrong.

Overall, Immortals turns into a cheap knockoff of 300 gone horribly wrong. Instead of taking what was good and trying to imitate that—the dramatic fights, heroic sacrifices and larger than life characters, it exaggerates the art of 300 to the point of childish mockery and twists the villains into larger-than-life blandness.

Showtimes for Immortals in the Myrtal Beach Area from IMDB.com

I want to thank the staff and management at Carmike 12 in the Myrtle Beach Mall for making my movie-going experiences a great one. For more information on Carmike 12 and current listings, go to www.carmike.com.