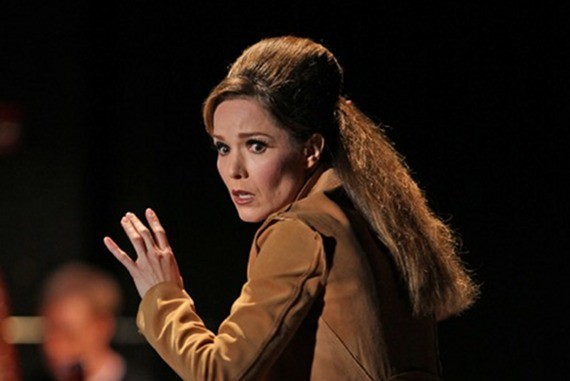 One of the biggest highlights of the Spoleto Festival rides on the shoulders of one woman: Heather Buck, uber-talented soprano and star of the highly acclaimed opera, "Proserpina."

Sung in German, Buck fully engulfs her character, the tortured Roman goddess abducted by Pluto, and trapped in the horrors of the underworld.  Her voice was soul-piercing, attention grabbing, and dripping with emotion.  At one moment you feel sad, tortured, as you watch this gorgeous young woman scramble and hide across the stage as she hides from her captor, the next your heart is chilled with rage and resentment as she comes to realize and accept her role as "Queen of the Underworld," as the Fates (played by the Women of Westminster Choir) sing their exalting song to their new Queen, "You are Ours."

The set is also truly magnificent, but not in the usual, glamorous and flamboyant details of the expected norms of an opera set.  It's one large space, with two grey, dismal walls, a ceiling out of thatched sticks, two doors, and one single green armchair chair.  It's simple, yet sharp, with bold lines and modern character.  Inspired by the local and historic Aiken Rhett house, the set is powerful, yet understated, and serves as the perfect backdrop for Buck's simple green dress, bright blonde hair and muted heels.

Pluto, played by Jason Bruffy, also wear very modern clothing.  From bright blue Adidas sweatpants, to a sharp, fitted suit in the closing scene, Buffy personified the modern version of Pluto - heartbreakingly attractive, and monstrous all in the same stroke.

I must be honest, although I am a fan of opera, this was my first-ever attendance to one.  So rather than give you my non-expertise on all of the musical details of the show, I'll let you read on to the New York Time's fantastic review of the show, and get more of the nitty-gritty production details at the Post & Courier.