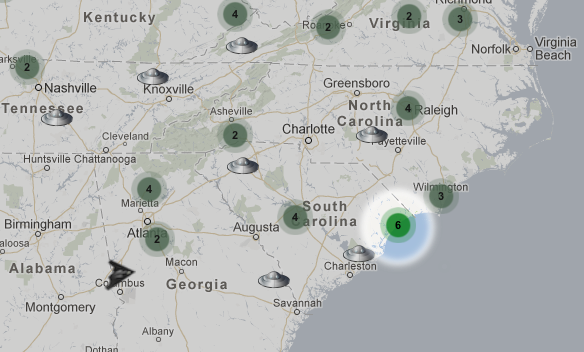 Update 10/31/2012: One of our readers, Chris Gingrich of Gingalley, gave us a heads up on their latest sighting including video. His summary from the MUFON report is below.

Chris isn't alone. You can see from the MUFON map that our area has significantly higher reports than other surrounding areas.

On Wednesday October 17, 2012 at 11:51PM EST, my Wife, Son and I witnessed 2 separate fiery red balls of light pass through the night sky. The second of which I caught on my iPhone video camera.

The sky was absolutely clear and there were many stars visible. At first, we thought it was an airplane on fire but, there was no sound whatsoever. And, no headlights or flashing lights. Unlike a "shooting star" / meteor, the balls of light travelled across the sky and not straight down towards the earth!

The "balls of light" travelled in a straight line across the sky at approximately 25º NE heading NW. We only caught the first "ball of light" for several seconds. The second one appeared immediately after the first in the same general vicinity and lasted for almost a full minute before it faded away.

The shape was somewhat round and coned at times like that of a meteor travelling at a high velocity.

The size was fairly large but, hard to put into perspective since it was difficult to determine how far away the objects were.

Like I said, I took this video on my iPhone and the quality is bogus. I then brought the clip into Adobe Premiere so I could "zoom in" on the object as far as I could while keeping it in frame. It was impossible to keep my phone steady while still trying to watch the object at the same time so thats why the object is bouncing around. Sorry no tri-pod. :(

Update 10/30/2012: A year after our last update, The Sun News has an in-depth report on the local UFO phenomenon today. Read more here.

WMBF News has a new story that sounds very similar to the ones we read about in June (see below).

First Report: Thanks to a tip on Twitter from Myrtle Beach local Teri Rybacki we have learned that three people reported UFO sightings in the North Myrtle Beach area.

According to the Lights In The Sky blog, the reports were all filed to the Mutual UFO Network (MUFON) website and they all mention a numerous amount of orange or red lights over the ocean. The reports below are for your information... or entertainment. It all depends entirely on your level of skepticism.

I also realized there's a lot of "Myrtle Beach UFO" videos on YouTube. Some are embedded below. Watch at your own discretion.

Report:
I was sitting at the beach staring out at the ocean when I saw a bright red orange light appear directly in front of me over the ocean at about a height of 40 degrees in the sky, within another second another light appeared to the right of it, and another second later a third light appeared beneath them creating a triangle that was upside down. After 1-2 more seconds the lights turned off in sequence in the same order they turned on with around a second passing between each light disappearing.

Knowing that this was no ship/plane/man-made/natural object I decided to walk down the beach closer to where I was staying while still staring at the same point in the sky. Around 5-10 minutes later another one of the points appeared in the same area and after another second a second point appeared directly next to it. They stayed on together for 1-2 seconds and then turned off in sequence as with the first event.

At this point I went back to my room to investigate similar events. I was back at the beach from 10:45-12:00 and saw nothing else.

Report:
Last night I saw 2 events on the beach in front of the resort I was staying at(Ocean Creek) [which I reported]

Tonight my Dad and I decided walk walk don to the beach a little earlier to see what we could see.

We reached the shoreline at 9:35 and immediately saw 3 red-orange flashes to our SE. Over the next hour we saw 7-9 grouping of the red-orange lights flashing with anywhere from 1-7 lights in each event usually flashing in a sequence, once with two flashing on and off moving in a line across the sky.

After 40 minutes we saw what appeared to be 4 fighter jets (my dad saw 6) flying at a very high altitude to where the highest amount of activity had been over the ocean. They then returned from the direct that they came from.

We saw 2 more events after this with the red-orange flares. The last occurring at 10:34pm.

We never heard anything, but that is not unusual due to the high speed winds coming off the ocean.

The total number of red-orange lights we saw was probably between 40-60 over the course of the hour.

Report:
First saw the series of lights over the ocean (clear night, so no cloud to judge height) while sitting on the front porch of a beach house overlooking the beach. One light, then another to the right of it, and then another. Each light would hold anywhere from a second to 15 seconds. They didn't turn on or off, but would flare up and back down, like the fire of an engine or something hot. The objects would appear, dissappear and fly off at different intervals. At one point there were 8+ lights in the sky. The way they would appear/disappear reminded me of how starships would come out of hyperspace in Star Wars, except the brightness of the engines would only flare as it was stopping and then the light would fade as it moved away. We saw probably 50~60 lights in different spots over the course of 30 minutes, but I don't know if they were the same thing or different. About 20 minutes after seeing them, we started to see white (not orange) flashing lights from aircraft (about 5~8), likely military, come into the same area where the lights were. A few more of the orange flares came back in the area, but were soon gone and the flashing aircraft lights soon left after there were no lights left. There was no sound during the entire incident.