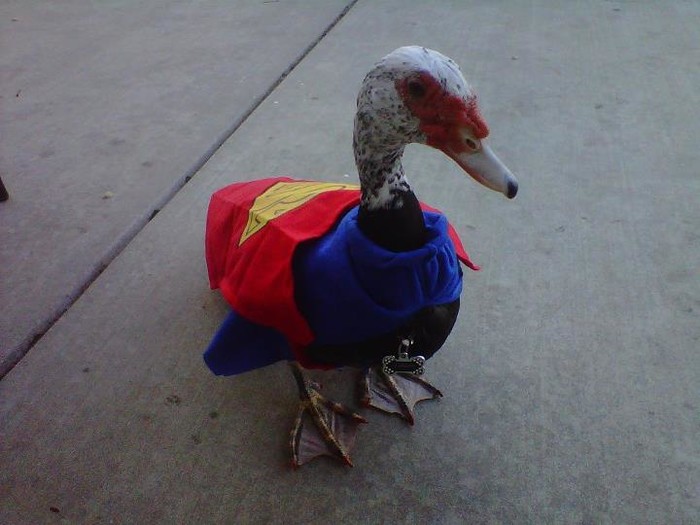 Photo Courtesy: Facebook
JJ Swan during his first Halloween, being all sorts of menacing and HOA-law-breaking....

Update April 4, 2012: JJ's court appearance will wait as his legal team has filed numerous pre-trial motions that must be sorted out.

WMBF News has more details in this ongoing story. Read it here.

First Report: JJ Swan, a duck that lives in Market Common and that has been adopted by nail salon owners Justin Chapman and Jennifer Tran﻿ is under attack by the Market Common HOA.

JJ Swan has become something of a celebrity at Market Common, attracting attention from WBTW News 13 back in August of 2011,

Chapman and Tran said one night in May (2011), they were walking and feeding the ducks at the lake in Grand Park when they heard the cry of a very tiny duck, which at first they thought was a swan. It was all alone, and it made its way over to Chapman's feet, and it appeared a nearby mother duck had no interest in the little guy.﻿

However, celebrity (and cuteness) aside JJ is a rule breaker! The homeowners association has it in for JJ.  Keeping a duck as a pet in a Market Common residence is a no-no according to their HOA rules. The HOA is not amused by JJ's painted nails and fashion sense, and most certainly does not care that JJ is the cleanest duck this side of the Mississippi thanks to his daily baby shampoo baths.  All they care about are the rules.

The HOA has been issuing fines to the salon owners, which started at $25 and has grown to $100.

WMBF News has a full story over the flap surrounding JJ and the HOA, and SCnow.com has a nice tail about JJ's adoption and rise to Market Common fame.

JJ Swan, like any other tech-savvy broad blunt billed, short legged, webbed footed with a waddling gait waterfowl, has a blog where you can purchase "Save JJ from the HOA" schwag. And of course you can friend JJ on Facebook. ﻿

The question we must ask ourselves is: As a civilized society, if there are no arbitrary rules imposed by homeowner associations then what truly separates man from an overly-pampered duck? ﻿