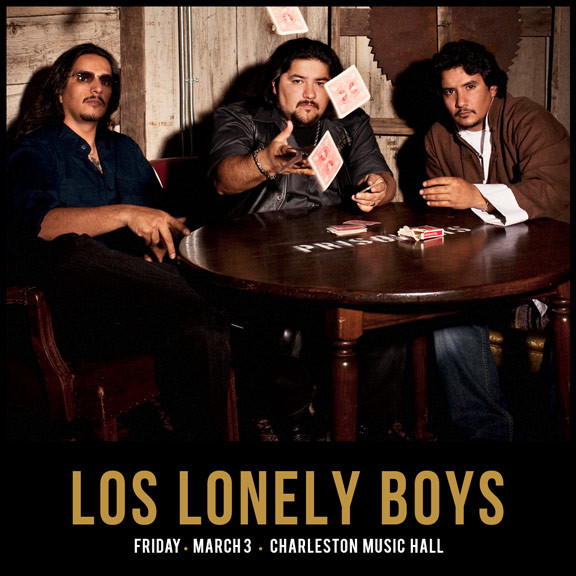 “We decided to call this album Revelation because we want to make music that reveals something to people about their lives and their world,” says Jojo Garza. He’s talking about the new release by Los Lonely Boys, the close-knit Texas trio that the bassist/vocalist shares with his brothers Henry (vocals, guitar) and Ringo (drums, vocals). “As musicians and artists, we’re here to connect with people, and to share our view of things.”

Revelation — to be released on the band’s own LonelyTone imprint Jan. 21, 2014, in association with the respected Austin-based indie Playing in Traffic — is a landmark release for the siblings. While maintaining the infectiously melodic mix of bluesy rock ’n’ roll and rootsy brown-eyed soul that’s long endeared Los Lonely Boys to its fiercely loyal fan base, Revelation adds an expansive range of new sonic elements, e.g. the conjunto touches of “Blame It On Love,” the reggae groove of “Give A Little More,” the rustic acoustic textures of “It’s Just My Heart Talkin’ and the baroque pop elements of “There’s Always Tomorrow.”

“We’re always trying to broaden our horizons and advance musically, and that’s something that we were very conscious of in making this record,” Jojo states. “We’re always looking for new ways to communicate and reach people, so we experimented with a lot of different sounds and production approaches.”

“We nearly lost Henry, man, and that was a big change for us,” Jojo acknowledges. “The whole experience was a wake-up call for us. It made us rethink every aspect of our lives and our careers, and it reminded us of what’s really important to us.”

The abiding sense of family unity and creative rapport that allowed the band to weather such a potentially devastating event has been built into Los Lonely Boys from the beginning. Indeed, Henry, Jojo and Ringo have been making music together for their entire lives. Their father, Ringo Garza Sr., was a member of another sibling band, the Falcones, which played throughout southern Texas in the ’70s and ’80s. When that group disbanded, Ringo Sr. went solo, and recruited his three young sons to back him. The family relocated to Nashville in the ’90s, and soon Henry, Jojo and Ringo Jr. began writing and performing their own material as a trio.

After moving back to Texas, the brothers recorded their eponymous debut album in 2003 at Willie Nelson’s Pedernales studio in Austin, with Willie himself guesting on the sessions. Although originally released on small Or Music label, Epic Records picked up Los Lonely Boys for major-label distribution in early 2004. The album quickly won the band a large national audience. Its lead single “Heaven” became a Top 20 pop hit, reached the #1 spot on Billboard’s Adult Contemporary chart, and eventually won a Grammy Award for Best Pop Performance by a Duo or Group with Vocal.

After a prominent guest appearance on the 2005 Santana album All That I Am, Los Lonely Boys solidified their success with 2006’s Sacred, which brought two more Grammy nominations, and 2008’s Forgiven, as well as the holiday-themed Christmas Spirit. Meanwhile, the band continued to build its reputation as a singularly powerful live act.

In early 2009, Los Lonely Boys made their LonelyTone/Playing in Traffic debut with the all-covers EP 1969, followed by the unplugged Keep On Giving: Acoustic Live! Those releases set the stage for the band’s acclaimed 2011 album Rockpango, and for the creative leap forward that Revelation represents.

“We want to make music that brings people together, not music that divides people,” Jojo states. “We’re all about having a good time, but we also make an effort to write about things that really matter. A lot of people write songs about superficial things, like how you look and what kind of car you drive and how much money you have, but we’re not interested in that. We want to create music that’s about the love and the energy and the spirit that we all carry as people.”

“We’re very thankful that God blessed our family with a drummer, a guitar player and a bass player, and that the three of us get to make music together,” Jojo concludes. “There’s been a few bumps in the road here and there, but that happens in any family and in any band. The main thing is that we stick together, and that we’re trying to pass on that feeling of brotherhood, of familia, in the music that we make.”

This ticket is an additional $32 per person and includes one individual ticket to Los Lonely Boys and a prix fixe dinner menu at Vincent Chicco’s located next door to the Charleston Music Hall.

Dinner reservations required; call Vincent Chicco’s at 843-203-3002 (price does not include tax and gratuity).

Head to the source at charlestonmusichall.com