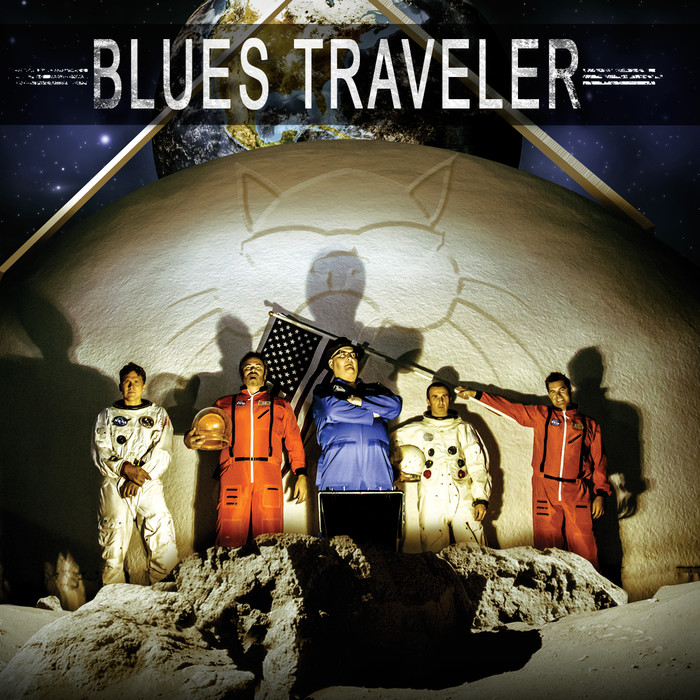 After selling millions of records and logging thousands of miles on the road, GRAMMY award-winning band Blues Traveler continue to chart new musical directions evident on their upcoming record Blow Up The Moon. A clever collaboration between various artists, Blow Up The Moon sees Blues Traveler keep an open-minded perspective on making music and enlists an eclectic mix of songwriters influenced by the band’s remarkable 25+ year career.

Blow Up the Moon is the first collaborative album that Blues Traveler has ever made. Prior to these sessions, it was rare for the band to have someone else perform on their songs and even more rare to have anyone outside the band write with them. This process was a unique and successful experience for each of these artists who each found new depths and energy in their writing and performance. Blow Up The Moon is an exciting collaboration featuring a range of artists across the spectrum, representing country, pop, reggae and hip-hop.

“We wanted to experiment with co-writing since we usually try to do everything in-house, in this misguided homage to The Beatles,” says singer John Popper. Blow Up The Moon allowed Blues Traveler to expand their musical palette while holding the foundation of their distinct and explosive brand of rock. “We found quality writers to see what they could bring to us as a band, and also people who could see our strengths, something that’s hard to see for yourself.”

The concept for Blow Up The Moon came about when the band was commemorating the 20th anniversary of their six-times platinum, award-winning and breakthrough album Four. “Once the idea was put out there, the thing took on a life of its own,” says guitarist Chan Kinchla. “We had so much fun reinvigorating our songwriting. This was an organic process that worked.”

“Nikkia’s Prom,” which Blues Traveler collaborated on with the Chicago pop-punk band Plain White T’s, was brought about through a Twitter conversation. While the groups had not met before, Popper and Plain White T’s vocalist Tom Higgenson bonded over the film Kill Bill. “Nikkia’s Prom” imagines what would happen if the daughter of Uma Thurman’s badass assassin showed up at her future high school dance. As drummer Brendan Hill said, “Like with all the bands we worked with, we just hit it off with them very easily. John and Tom holed themselves in a room and the rest of us just worked on key changes and rhythms. We all had the same kind of humor.”

Sharing humor and an open-minded perspective on music made the collaboration between Blues Traveler and electronic duo Sean Foreman and Nathaniel Motte, better known as 3OH!3, work so well. 3OH!3 are represented with two cuts on the disc, “Hurricane” and the title track which also includes contributions from J.C. Chasez (*NSYNC). Keyboardist Ben Wilson says Foreman, “is one of those real grinders who pored over every word all day until he felt we had a real coherent tune. And Sean played an instrument called a guitalele, which looks like a ukulele, but has six strings. When you hear it in this context it has a twangy sound that’s just awesome.”

Blues Traveler also had a relaxed time working with the California ska-punk band Dirty Heads on “Castaway” and “Vagabond,” which singer Rome Ramirez (from Sublime) produced. “Both bands just kicked back, handed some chords down and everybody added lyrics,” said bassist Tad Kinchla. “We would just learn the chords while we were all in the room together and played it the way we felt. It’s the luck of getting along with people.”

While Keifer and Shawna Thompson from the popular country team Thompson Square are a very different group than 3OH!3 or Dirty Heads, they were equally excited to work with Blues Traveler on “I Can Still Feel You” and “Matador.” The latter piece was written with Merle Haggard in mind and how he deserved more respect within the music industry. It’s a theme both groups know all too well, especially as they dare to challenge any imposed limitations. “They want to push boundaries,” Popper said of Thomson Square. “Generally, they stick to love songs, but here they wrote a philosophical statement about how the industry will embrace you and then turn on you. With them, we enabled each other to broaden the idea of genre and help it lose its meaning. Music is never supposed to be monogamous.”

A few stars that ascended at the time of Four also make guest appearances on Blow Up The Moon. Jewel lends her voice to “Hearts Are Still Awake,” and Thomas Ian Nicholas (star of American Pie), worked with Blues Traveler on “All The Way.” Hanson, the brothers who gave the world “Mmmbop,” join in on “Top Of The World.” Wilson said, “Hanson were huge fans of us back in the day – they were little kids then and 14 years later, here they are, grown men and had the tune almost the way they thought it should go, and we played it down until we got it right. They’re great singers and cool songwriters.”

Other collaborators on Blow Up The Moon include Secondhand Serenade who perform on “Darkness,” and co-wrote “Hearts Are Still Awake.” “Jackie’s Baby,” a song of soaring hooks and the collaboration with New Hollow, is according to Popper a new slant on the imagery in The Beatles’ “Rocky Raccoon.” Working with Bowling For Soup on “Waiting For You” and “I Know Right,” proves that Blues Traveler is in no danger of taking itself too seriously. That piece is a satirical look at online communication. “That title phrase just covers everything now,” Popper said. “It’s easy to talk to someone or beat up someone on Twitter, but try to come up with something new to say.”

Blues Traveler plan to spend all of 2015 on the road and are looking at more collaborative projects in the future since, as Wilson said, “There are a lot of different ways to write songs, and so many different ways to work with other people and arrive at the same place. It was reaffirming, but also instructive in teaching us how to say something simpler. When you listen to what came out of it, it’s something to be proud of.”

Loud & Proud Records will release Blow Up The Moon on both CD and vinyl in North America via RED Distribution (a division of Sony Music Entertainment) and in the rest of the world through earMUSIC. Loud & Proud see Blues Traveler as a relevant artist and the collaborations as exciting partnerships proving the band’s versatility