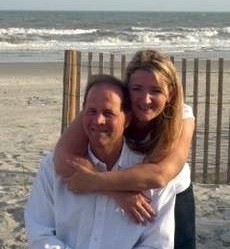 The other day I had the pleasure of talking with Fred Coyne, the new candidate for the Cherry Grove North Myrtle Beach City Council seat.  Fred moved to this area about 25 years ago, originally intending to be here about 10 days, helping a friend with a construction project.  Not surprisingly, he fell in love with the area and never left.

He's been in construction since he was a kid and realized he could dig ditches for $4 an hour, which was better than the $2.23 his family paid to work in the car dealership they ran.  Fred literally worked his way through the trade, and up the ladder, eventually becoming the owner of his own company, Westbridge Homes.

When I asked him what he wanted for North Myrtle Beach, he said, "To keep moving forward."  Mr. Coyne loves the city he lives in, and wants to retain its integrity while always working towards improvement.  I saw parallels in his fitness routine and goals for the city.  He stays focused and centered with pilates and core training, and goes the distance with cycling.  Sounds like a good plan to keep himself, and the city of North Myrtle Beach, healthy and thriving!

Editor's note: We're still developing our editorial policy for campaign related Open Community submissions. ﻿This post was a great example of how they should be done.