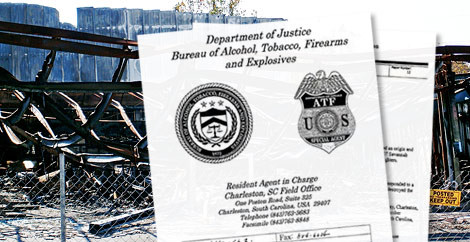 Image by Image of report overlaid on photo by flickr user grittycitygirlImage by 20080709fire2.jpg The remains of the Sofa Super Store. It's the site where nine firemen lost their lives.

A report released today says that a definite source cannot be determined in igniting the fire that led to the deaths of nine firefighters at the Sofa Super Store fire. But it also says that the opinion of investigators was that either a discarded cigarette started the fire or that it was intentionally started.

The report by the Bureau of Alcohol, Tobacco, Firearms and Explosives also says the opening of a door by the firefighters allowed flames to leap in and partly enabled the fire to be as bad as it was.

Read more about the fatal fire on our topic page.Still, the report did not pin down exactly who and how the fire started. Also, some information was blacked out by the agency in the report.

Update July 10: The Post and Courier has produced a more in depth version of the story that doesn't really get interesting until the last paragraph, when they say: "The Fire Department has been held accountable for its decisions the night of the fire, yet the employees and management of the sofa store have not, [Jean Dangerfield, sister of Assistant Engineer Michael French, one of the firefighters killed in the blaze,] said. Her family and seven others are suing the sofa store owner, furniture manufacturers and other companies."