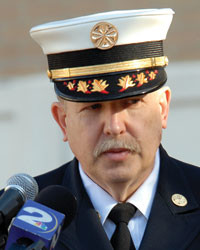 Image by City of Charleston

Update February 29: The Post and Courier﻿ has followed with a longer report but very little new other than the previously know info that Carr was hospitalized due to complications with Parkinson's, the paper notes that Carr's physical decline has been "plain to see."

Update February 28: A spokesperson with the Charleston fire department has confirmed that former fire chief Thomas Carr has been hospitalized just two days before his retirement. Hop over to ABC News 4 has the breaking news.

Update December 15: Two months on from word that current Charleston Fire Department chief Thomas Carr will retire on March 1, 2012,﻿ the department has officially made the job search public with an online posting. The job carries a salary range of $120,000 to $135,000.

Update September 18: The Post and Courier﻿ has published a follow up report that, amongst more depth on Carr's retirement, notes that the city is searching for a replacement.

Below is the official statement, in its entirety, from Carr:

My most recent visit to the neurologist brought good and bad news that I need to share with you. Physically, my doctor said I looked better than I did 6 months earlier but he had life changing news.

As we've discussed previously, Parkinson's is difficult to diagnose and as it has been in my case. My initial diagnosis was tennis elbow and it wasn't until later that I was diagnosed with slow developing Parkinson's.

Parkinsonism is a group of neurological disorders or syndromes. Parkinson's is the most common and slowest developing.

Unfortunately, my doctor now believes I have one of the more severe syndromes of Parkinsonism. The syndrome is known as Multiple System Atrophy (MSA). MSA is a rapidly developing, debilitating condition that doesn't respond well to medication.

As a result of this change in my diagnosis and prognosis, I will be retiring on March 1, 2012. For the next six months we will continue to focus on moving the Department forward as a search for my replacement is conducted.