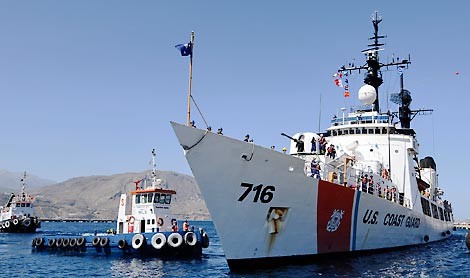 8:17 am on Wednesday August 27, 2008 | Posted by Ken Hawkins
Charleston-based ship to help with Georgian relief

Image by Coast GuardImage by 20080827dallas.jpg 378-foot, Charleston-homeported, U.S. Coast Guard Cutter Dallas is off to supply Georgia with aid.

The Charleston-based Coast Guard Cutter Dallas is scheduled to deliver humanitarian aid to the Georgian government after its recent conflict with Russia.

"The crew of Dallas really wants these goods to make a difference in the lives of the Georgian people," said Capt. Robert Wagner, commanding officer of Dallas. "When we received the order to deliver these supplies, the men and women of this ship responded quickly at every turn."

Dallas's homeport has been Charleston since 1996.

Earlier this month Charleston-based air crews helped return 2,000 Georgian troops back home from Iraq. And, the Charleston Air Force Base has had a continuing role in getting goods sent over to Georgia.

Thanks to NBC News 2 for tipping us off.

Update August 28: The New York Times writes about how deployment of ships, like the Dallas, are likely part of a larger military posturing against Russia.