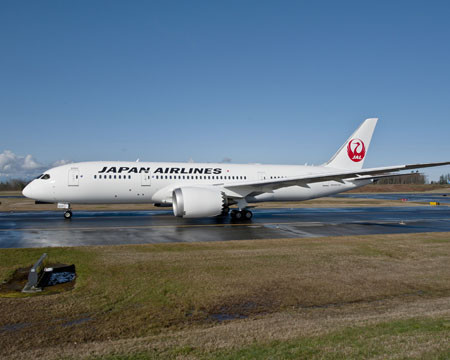 Update, February 25: Japan's All Nippon Airways has cancelled all projected 787 Dreamliner flights through May.

Destinations of the aborted flights include, but are not limited to: Seattle, San Jose and Tokyo. ANA has 17 Boeing 787 Dreamliner aircraft, which is more than any other airline. They have been forced to cancel approximately 3,600 flights which would have transported just fewer than 168,000 passengers.

Boeing Co.'s 787's have been grounded since January 16 due to the possibility of battery fires inside the planes. The company assembles the Dreamliner in North Charleston and Everett, Washington.

Update February 21: As investigations continue as to why the aircraft's batteries have failed, United Airlines has announced that it has removed all Boeing 787s from flight plans through June 5.

Read more at the source on Reuters.com.

Update February 12: After two test flights and plenty of data collection, Reuters is reporting that the U.S. National Transportation Safety Board is investigators believe that tiny fiber-like formations, known as dendrites, inside lithium-ion batteries are one of several possible causes in battery failures on two Boeing 787 Dreamliners last month.

The Japan Transport Safety Board is conducting investigations of its own.

For more, head to the source at TheHuffingtonPost.com

Over the last few weeks, groundings occurred for two separate Boeing 787 jets because of a thermal runaway, short cirucit and subsequent combustion inside the lithium-ion battery aboard the aircraft.

For a full report, The Charleston Regional Business Journal has the story.

Update, January 16: Japan's All Nippon Airways and Japan Airlines grounded all Boeing 787 jets today after battery problems and a burning smell caused an emergency landing and evacuation at the Takamatsu airport in western Japan.

These aren't the first setbacks noted in the 787 fleet. The aircraft have been plagued with engine troubles and even had a part of the plane detach during test a flight.

CNBC has some solid reporting on the most recent incidents. Read it here.