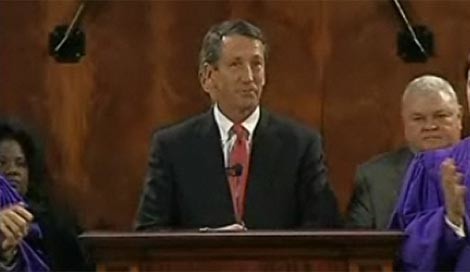 6:13 am on Thursday January 15, 2009 | Posted by Ken Hawkins
Governor widens appeal in State of the State address

Our governor, Mark Sanford, held his annual State of the State address last night and went for a constructive tone, even integrating Obama's populous pitch of "yes, we can."

The State has my preferred write-up, in part:

Gov. Mark Sanford outlined a mix of new and old ideas in his annual State of the State address he felt would improve the state economy, improve education and streamline state government.

Sanford also used Wednesday night’s speech to present an olive branch to lawmakers with whom he has frequently battled during his six years as governor, though he was critical of lawmakers for failing to pass his proposals in prior years.

As part of his plan, the corporate tax would be eliminated in the hopes of attracting more businesses. That change would be paid for by raising the cigarette tax.

I'm writing this article 13 hours after Sanford's speech ended, and reaction is already out there.

The Post and Courier is loving Sanford's direction, and has penned an editorial titled "Tap into Sanford's frugality."

But the most interesting points I saw came through The Indigo Journal. John Warner, head of the online business community Swampfox, said "Sanford is talking to a national audience. A nicer, softer Governor. Yes we can."

And that logic seems to play well with the concept of a governor who's being forced out due to term limits and setting his sites on higher office.

You can watch the full State of the State address (as well as the Democrats rebuttal) at S.C. ETV. Go view it.

You can also read the full text of his speech over at the governor's Web site. As wells as the text of the Democratic response at The Post and Courier.

Update January 15: South Carolina politics blogger Adam Fogle was somewhat less than impressed with the governor's address. Fogle said, in part, "In fact, I went out of my way to miss it because, as I told someone earlier today, I would rather stick pencils in my ears."