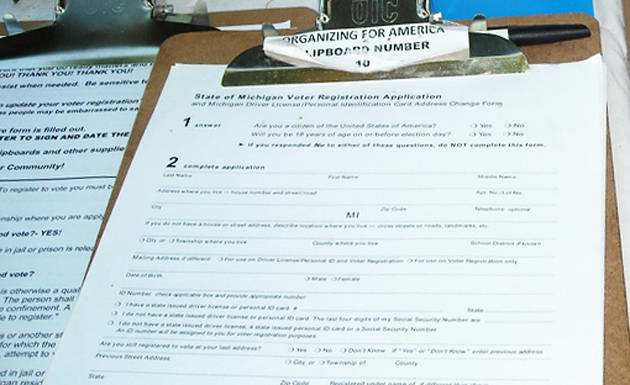 First Report 8:29 a.m.: Now you have no excuse to not register to vote ahead of the October 6 deadline. The South Carolina authority has announced that you can completely register online.

Yesterday the S.C. State Election Commission announced its new program and touted that the Palmetto State is joining a group of 13 states that allow citizens to register to vote online.

You can register over here, as long as you have a valid S.C. drivers license or S.C. ID. Your new card should come in the mail within a few day.

"South Carolina has made important improvements to our registration and elections process in the last decade, and we are proud to announce one of the single most important changes to the process is now a reality," said Marci Andino, executive director of the State Election Commission. "There's no waiting in line, no forms to print out, nothing to mail in. Any eligible person can register in just minutes."

After completing the online form, the information is verified instantly using existing data on file with SCDMV. Once the county voter registration office reviews the application, the voter receives a voter registration card in the mail within a few days.

"It was a cumbersome process where something as simple as transposing a number on an envelope could result in a lost registration form," Andino said. "Now, South Carolinians can complete one simple form and it's automatically sent to the proper county office."

Update 12:05 p.m.: We've received a press release from the South Carolina State Elections Commission that says thanks to this new online ability there are now 3,000 new registered voters in South Carolina in less than 24 hours.

via the Press Release:

In less than 24 hours, more than 3,000 voters took advantage of South Carolina’s new online voter registration system.  The system was made available to the public at 2:00 p.m. on Tuesday, and by 10:00 a.m. Wednesday, 3,102 applications had been submitted.

“Voter registration has never been easier, and we’re pleased that citizens are taking advantage of this wonderful new opportunity,” says Marci Andino, executive director of the S.C. State Election Commission. “This overwhelming response proves South Carolinians are eager to make their voices heard in November.”

And remember folks: You must be registered by October 6th to vote in the November 6th General Election.

Make sure to share this story with all those unregistered friends here in South Carolina so they have no more excuses!

Update October 11th: While it is too late to register for this election season, you can always do so thanks to the above mentioned online registration system.

The system was given the OK and introduced this past Tuesday, October 2nd and only gave potential registrants five days until the October 6th deadline to register to vote for the 2012 elections. But in those five days, 17,000 new voters were registered.

That news is great, however, news that fewer folks registered to vote prior to this election than the 2008 election is a little disheartening.

Read the full story over at WPDE News Channel 15.