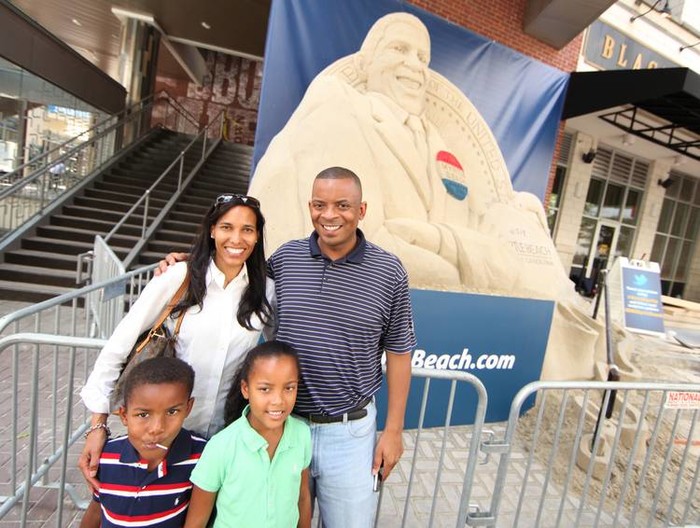 Update September 2: According to a brief by the Washington Times, a heavy storm passed through causing damage to the display.

Rumors about the sculpture being destroyed and relocated spread over social media on Saturday. But the reality is the sculpture was being repaired as soon as the storm passed.

If the goal of the sculpture was to get people's attention, then it has worked. Whether it's a national news report or a snarky tweet, the large majority of the DNC coverage mentions the sculpture.  Either way, the "Mount Obama" (not to be confused with the real Mount Obama) has been covered by numerous media outlets. For a brief period of time, the sand scuplture even had it's own Twitter account before it was suspended.

Here's a video from Fort Bragg Patch of the sculpture being built:

First Report: The VisitMyrtleBeach.com 15.5-ton sand sculpture, made completely of South Carolina sand and depicting President Barack Obama, is now complete and stands just outside of the EpiCentre in downtown Charlotte.

The sculpture took five artists of Sarasota, Florida-based 'Team Sandtastic' three days to complete. Charlotte Mayor Anthony Foxx and family stopped by to have their photo taken with the sculpture earlier today.

"We were so pleased to see the mayor and his family stop by to see the sand sculpture," said Brad Dean, President and CEO of the Myrtle Beach Are Chamber of Commerce/CVB. "Charlotte has done a wonderful job to ensure the thousands of people in town, including the Myrtle Beach team, feel welcome and enjoy their stay."

Charlotte is 175 miles from Myrtle Beach and is considered to be the Carolina's most-popular beach destination. In 2011, more than 1.3 million visitors from the city visited the Myrtle Beach area, and local tourism officials hope the sculpture that notion will be reinforced while thousands of people are in town for the DNC.