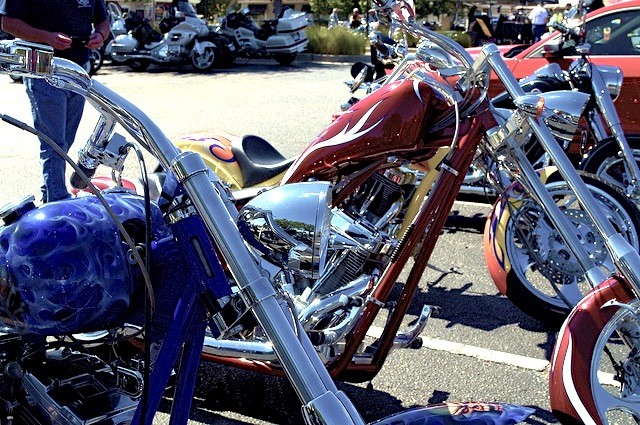 Update April 3, 2012: The third and final reading of the new motorcycle restrictions will be at tonight's County Council reading.

Details on how to watch the meetings online or televisions are below. Thanks to The Sun News for the reminder.

Update March 12, 2012: Now that the Horry County Public Safety Committee has established their position on body shots, Horry County Council gets to set the time period that vendor permits will be valid.

On Tuesday, there will be a second reading of the ordinance which actually reduces the time frame for vendor permits from seven down to five days. This reading will also serve as public input and The Sun News reports that the public has plenty of input to give on the subject. You can read more here. Tuesday night should be a lively, if not long, council meeting. Grab some popcorn and watch it unfold online or tune to Time Warner channel 3 or HTC channel 14﻿.

Update February 3, 2012: As we pointed out in our report from January 26, 2012, the local chapter of ABATE is not happy with Myrtle Beach Harley Davidson.

"ABATE is officially calling for a boycott of all the dealerships and clothing outlets that are owned by Phil Schoonover, and we hope that the biker community as a whole will come together with us on this boycott until such time as Mr. Schoonover retracts his plan of the over lapping dates he has proposed for this year.﻿"

Several local news outlets covered this story, but The Sun News Opinion Blog has the full text of the letter.

Sitting in on a regular conference call of over 500 sport bike enthusiasts, The Sun News learned that the Bike Fest attendees have been primarily talking about what they are calling, "The 2012 Myrtle Beach Shakeup﻿." Their biggest concern? If there will be enough lodging for everyone. The Sun News has more details from Lorena Anderson's in-depth report. Read more here.

Update January 27, 2012: It almost sounds like nobody is happy about this new extended schedule, even the bikers.

Atlantic Beach has concerns of how this could disrupt their Memorial Day Bike Fest event. Some citizens are even suggesting Bike Fest isn't worth hosting.  WPDE fills us in here.

As we reported yesterday, even some motorcyclists aren't enthused about the surprise changes. WBTW has a short write-up here. Finally, The Sun News Opinion Blog says that Horry County Council should be careful in how they handle the situation. Suggesting banning all vendor permits may only fuel the fire. Read the editorial here.

Update January 26, 2012: During the course of this story, pretty much everyone is pointing their fingers at Myrtle Beach Harley-Davidson for causing the confusion. Including local motorcycling advocacy group ABATE.

The way ABATE sees it, this new extended schedule is unnecessary and will only re-open old wounds between the motorcycle enthusiasts and politicians. WMBF has more details here. Horry County is already kicking around the idea of not issuing any vendor permits. You can read more about that in The Sun News.

That's pretty much the summary from today's write-up in The Sun News. There's a more detailed breakdown of what each week brings on the Jamin' Leather Rally website. As expected, City of Myrtle Beach officials are showing a mixture of displeasure and apathy over the whole thing. Head over to The Sun News website for more information.

First Report: The Sun News reported on Friday that Myrtle Beach Harley-Davidson has announced the dealer-supported rally will be for 10 days starting on May 18, 2012. This only adds to the confusion of others promoting the event starting on May 11 and May 14, 2012.

Horry County is still operating under the original six-day schedule of May 14 until May 20, 2012 for the Harley rally.  Read The Sun News write-up by Dawn Bryant for more details. Usually locals get a chance to catch their breath between the two spring events.﻿ The result of this date confusion could be worse than before the City of Myrtle Beach decided to "Take Back May" with nearly a month of bike traffic congestion and overlapping events. Then again, with the Florence motorcycle rally planned in March, bikers might become so annoyed and skip the Pee Dee altogether.