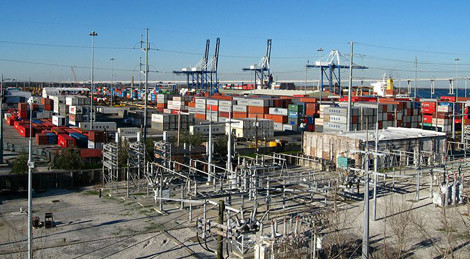 Image by Wikimedia user Jonathan LambImage by port.jpg The Columbus Street terminal is one of five Port of Charleston terminals, though a permit has been granted for a sixth port terminal at the former Navy base in North Charleston.

Sen. Jim DeMint and Rep. Gresham Barrett were at the Port of Charleston on Friday, calling for an expansion of the state's port capacity in order to become more economically competitive. The two are trying to raise support for a new shipping container terminal in North Charleston, and say that by expanding capacity, the state will draw more shipping traffic. DeMint also referred to Jasper County as the next step in bringing more shipping to South Carolina.

"We want to make sure we have port capacity to move as much as we can make," said U.S. Senator Jim DeMint.

"We may (lose) the next BMW or Michelin, if they look and see that we as a state have decided not to grow," said DeMint.

DeMint praised the effort to build a new terminal in North Charleston, as Live 5 News reports:

The Ports Authority has tried for almost 20 years to build a new terminal but has faced repeated opposition. Recently a permit for a new terminal at the old Charleston naval base was granted.

That's a good start, says Sen. DeMint. "What we hope to do in the future is that this will be one of the premier ports in the country, in the world, right here in Charleston."

DeMint said opposition to port expansion is putting the state's economic future at risk, and Barrett said that, despite a recent downturn in imports due to the weak economy, expansion should still be the goal. The Post and Courier writes:

Barrett said the slowdown at the port doesn't diminish the long-term need for a new terminal.

"When things are bad, it gives us pause" to develop a plan and prepare for future growth, he said.

All of this comes on the heels of a recent report by the U.S. Government Accountability Office that was critical of port security efforts after the Sept. 11 attacks.