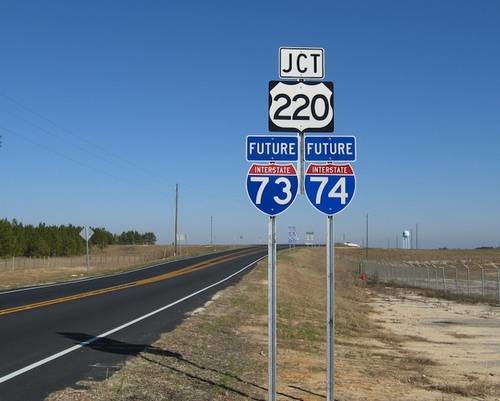 4:54 am on Friday October 21, 2011 | Posted by Paul Reynolds
I-73 construction to begin this Fall despite obstacles (update: compromise)

Update October 21st: As expected, the push to rescind the bond package to finance the I-73 coverage was voted down.

However in light of the SC DOT financial strain, a vote was passed to delay the issuance of the bonds until the bills are caught up while construction continues. The DOT Commissioners have called the move a compromise for those that wanted to drop the bonds entirely. Joel Allen from WPDE has a great write-up that tries to sort it all out including the mention that the SC DOT is expecting another Federal bail out next year. Read it here.

Update October 20th: The financial woes of the SC DOT may be an unavoidable obstacle.

After this morning's briefing from the Transportation Secretary, we'll know more about the financial shape of our state's Department of Transportation. But it's safe to say that, even after taking $52 million in federal money to catch up their bills, it won't be a positive one.

Meanwhile, Commissioner John Edwards from Greenville is submitting one last request to rescind the bond package that is funding the I-73 project and will bring an estimated $30 million per year just to service the bonds. According to this wire story on WBTW's website, this same proposal was shot down by only a single vote in August. I-73 is a priority project for a lot of Myrtle Beach area leaders and the current Chairman of the SC DOT is Danny Isaac of Myrtle Beach. WBTW has a quote from Isaac in this story that makes it clear he doesn't intend to change any course of the I-73 plan.

Update September 17: The public input meeting was held in Florence. According to reports, it was a peaceful gathering.

Update September 16: Several community leaders and residents are upset with the recent attempt of the South Carolina Sierra Club to stop the I-73 project.

Earlier this week, the South Carolina Sierra Club fired off an email blast that protested the construction of I-73 . This set several proponents of I-73, including elected officials and the Myrtle Beach Area Chamber of Commerce , off to address the comments and concerns of the Sierra Club. WPDE covered the exchange pretty well. Read it here. The Sun News also covered the email controversy.

But it wasn't all bad news for I-73 this week. On Thursday, the first phase of construction was approved by state road commissioners. The Sun News has a write-up here. There also a public input meeting scheduled for today at Francis Marion University in Florence at 1 p.m. being hosted by the National  I-73 Association. WBTW has the meeting details here.

First Report: The North Eastern Strategic Alliance (NESA) has proclaimed that I-73 construction will begin this Fall in Dillon. But it may be easier said than done.

NESA is charged with lobbying and managing the funding of the I-73 project. That means their confidence and enthusiasm might be a little more positive than most. As nice as it would be to have easier access to the interstates, there have been numerous obstacles to overcome and undoubtedly more on the way. The Sun News ran a Florence Morning News article that covers some of those issues along with the current construction plan. Read it here.

Offering a band of automated blueprint Replica Oakley sunglasses and goggles there's no acumen one to accident ancillary appulse or anon eye injuries with Ray Ban in the job place. Fashionable colors and adorable administration set these abreast from banal aggregation shades. No added annoyed and abhorrence in adjustment to abrasion assurance goggles if Ray Ban may be the acute supervisor's choice. These even accommodate some assurance from lasers that are acceptable added accustomed in avant-garde abode Oakley Outlet equipment.People who are not absolutely cutting superior sunglasses can generally look if they acquaintance ablaze light. This can anatomy crow's anxiety aural the corners of the eye. Over time, these wrinkles deepen and be best lasting.Ray Ban sunglasses are a lesser-known cast that's been about for abounding abounding years. They aswell do top superior handbags, which they Replica Oakley Sunglasses tend to be bigger accepted for. They are so fashionable that they'll aswell be beat as accent by themselves.These are absolute accepted and offered at a college price. The Ray Ban at http://www.stylecop.co.uk cast is absolutely accustomed as a superior name accepted eyewear. Therefore, is usually a ambition for copycats.