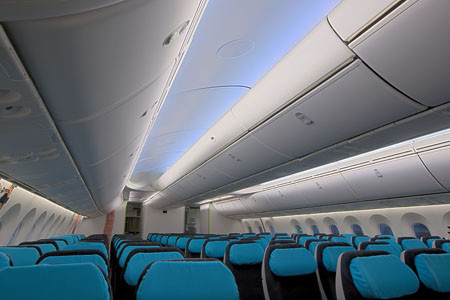 Update July 15: Boeing has announced it has selected a site 10 miles from their 787 assembly site at the airport. They state the land has been purchased from Stone Mountain Industrial Park which has several land holdings throughout the region.

Only one of those holdings is in the North Charleston area, 9 Patriot Boulevard, which happens to be 10 miles from the airport.

Update: The news conference is on and the announcement is out: As many as 150 jobs coming to the new interiors facility located near the North Charleston final assembly and delivery site.

"By expanding Boeing's footprint in South Carolina, we enhance our existing foundation with Boeing Charleston and further contribute to the growth of aerospace in the region," said Ray Conner, vice president and general manager, Supply Chain Management and Operations, Boeing Commercial Airplanes. "Ultimately, the decision we made in 2009 builds on our overall strategy to successfully meet our 787 customer commitments and to optimize our production capability."

You can get more details in the full announcement.

First reporting: The facility that is being built as a second final assembly plant for 787 Dreamliners appears to be set for an even broader mission.

S.C. Governor Mark Sanford will be on site in North Charleston today as a new, "expanded mission" is announced at 11:30 a.m.

Read more stories on this subject in our Boeing topic page.