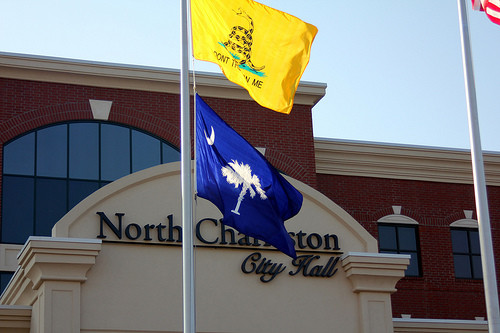 When North Charleston Mayor Keith Summey promised to elevate the debate in the fight over rail through downtown, he wasn't kidding.

On Thursday, the mayor was joined by city council to raise the Gadsden Flag (AKA, the "Don't Tread on Me" flag) atop the South Carolina flag in front of city hall.

It was an act of protest against the state's plans to place an intermodal rail facility on the former Navy Base with northern rail access. And the idea is to leave the flag up for the next 45 days, which is how much time before the city's lawsuit against the state hits the courts.

That is, unless a deal can be struck.

The mayor explained his actions in the following statement:

Just as with the American colonist, we are defending ourselves from a larger state, not standing idly by and allowing the quality of life of the citizens of North Charleston to be treaded upon. The State struck first when it confiscated land on the former navy base through eminent domain and purchased other tracts with the clear intent of dishonoring previous agreements between itself and the City of North Charleston.

Demagoguery has been used, painting the City as anti-port, anti-rail, and anti-business. Since incorporating in 1972, North Charleston has been a staunch proponent of each. We are home to vast and expanding port activities, location of all Lowcountry intermodal rail facilities, and the industrial and manufacturing epicenter of the State of South Carolina.

For over two years we have shaken our rattles, but at this point we intend to strike back in court. Our current course will only be altered if the State honors its written commitments. We will not remain defenseless as our citizens’ rights are trampled.

You can get more related coverage in the links below, or brush up on background of the debate here.