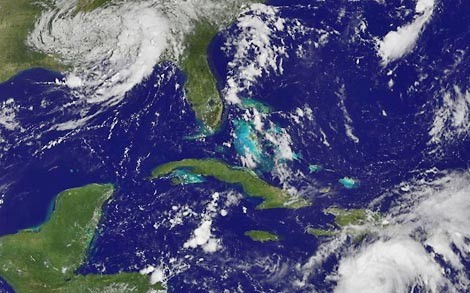 4:29 am on Tuesday August 26, 2008 | Posted by Ken Hawkins
Gustav steers away from Charleston as Fay dies down

Image by NOAA/NASAImage by 20080826gustav.jpg Gustav (bottom right) is getting running just as Fay is breaking up (top left). Several other "areas of interest" are also forming in the Atlantic.

Gustav has formed into a hurricane and is expected to pass over Cuba on its way into the Gulf of Mexico. The storm's 90 mph winds are expected to strengthen before it hits Haiti.

Global models have come into much better agreement that the hurricane will turn to the west-northwest or even west in a day or so.

Currently the storm is expected to strengthen as there is little shear wind fighting its formation and the water is quite warm.

Here's a link to their 5-day forecast map, and Weather Underground's computer models of the Gustav's predicted path.

While Gustav has been getting started, three other areas being watched for possible cyclones in the Atlantic. These spots are in a area that is traditionally more likely to come towards the Carolinas, than where Gustav has formed.

Update 8:20 p.m.: Gustav is continuing to move into the Gulf, and the three "hot spots" are still brewing.