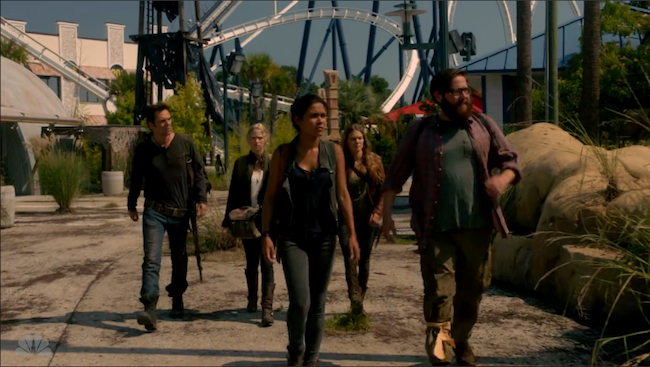 (Scroll to bottom for updates. episode too)

First Report 8/15/12: Where should a film crew look to film a post apocalyptic amusement park scene? Why not at the abandoned Hard Rock Amusement Park?

The new NBC sci-fi drama Revolution has been filming scenes at the old abandoned amusement park on 501. Really the old Waccamaw Pottery buildings would be perfect too. We're not sure what is being filmed or who from the cast might be in town but this post over at RevolutionTVshow.com suggests that they might only be filming some coverage sequences.

The casting call was put out by Double A Casting, they are based out of Wilmington and have provided casting for shows 'One Tree Hill', NBC's 'Revenge' and of course Digitel favoriteEastbound and Down.

A big thanks and generous hat tip goes out to Jennifer Sellers (@MyGreenGlasses) for her Tweet alerting us to the presence of the NBC film crew:

Update 8/17/12: NBC's Revolution has been quite active on Facebook and Tumblr as of late, posting photo updates and teasing locations. They never say where they're filming, however, by the looks of the photos it definitely looks like an abandoned amusement park.

Take a look a few of the photos they've posted on their Facebook fan page:

and a Tweet from someone on the Revolution crew.

We'll keep you posted on Revolution filming in Myrtle Beach. Before filming started locally, NBC's new show already had a Myrtle Beach connection, read all about that here.

Update 8/20/12: A new photo has been posted to the Revolution fan site, RevolutionShow.com.

The text of the photo reads:

Update 10/11/12: The episode of Revolution that was filmed at the old Hard Rock park here in Myrtle Beach aired this past Monday, October  8th.

In the show, the park was set in or around post apocalyptic Lowell, Indiana and besides the crazy guy living there with his attack dogs it looks like production didn't really have to add too much to add "abandoned for years" look to the scenery.

Watch the episode below.