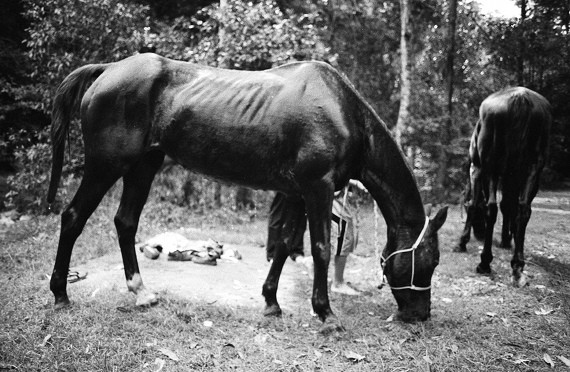 Charleston County officials and veterinarian Justin Miller of Shambley Equine Clinic are assessing the health of horses on the Kennerleigh Farm on Johns Island this afternoon.

An early morning anonymous tip alerted authorities that a number of horses on the farm were suffering from neglect and malnutrition. Miller has confirmed that he's found a lack of water, poor nutrition and signs of intestinal parasites in six horses thus far.

The property owner, who has not yet been named, is apparently cooperating with police.

Update August 24: The Post and Courier is reporting that two horses are in foster care and four more are on the mend; get the story on that and more here.

Rebecca Housley, owner of half a dozen malnourished horses on Kennerleigh Farms is being charged with ill treatment to animals.

Live 5 News has the update.

The College of Charleston is honoring their five-year, $513,000 contract with Rebecca Housley, the woman who is facing six misdemeanor counts of ill-treatment to animals.

"She is a certified instructor of riding. As of right now, we are honoring the contract. We are monitoring the situation," Mike Robertson, the college senior director of media relations said.

Horses help people to calm down and reduce stress as well as cats and dogs. For this reason psychologists recommend people subjective to huge stress or disable people to spend time with these animals. However, students can forget about stress as we do your homework fast and up to the level.

How can someone allow some animals to reach such a state? Some people really are careless and it's heartbreaking to see how animals suffer. Thankfully there are also people that react to this form of cruelty and alert authorities. Also, veterinarians do miracles in situations like these. The reviews one can find on this veterinarian st. paul mn resource speak so much on how involved are people in saving animals. We should all do more and get more involved.