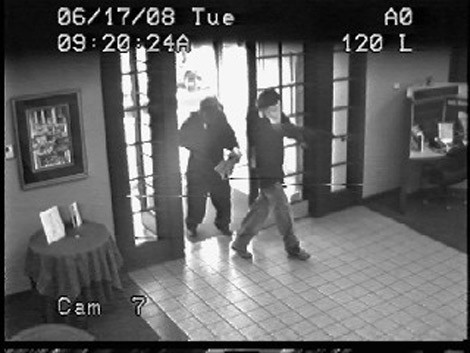 Image by WachoviaImage by robbery.jpg This photo taken from one of the bank's cameras shows two of the three robbery suspects.

A Wachovia bank in Summerville was held up Tuesday morning, though a dye bomb in the money bag exploded as the robbers were driving away, forcing them to abandon the car and flee on foot. Authorities are still on the hunt for the three suspects.

Police say three men entered the bank dressed all in black carrying weapons. With their faces covered and wearing gloves, they demanded cash.

They made off with an undisclosed amount of cash and drove off.

The suspects didn't make it very far. Police found the getaway vehicle, a dark-colored Mitsubishi, in an area not two blocks away from the bank.

The Post and Courier also has a report on the getaway car, which belonged to a West Ashley couple and was stolen recently:

Denny and Mary Sills of West Ashley wondered for days where their stolen black Mitsubishi went.

On Tuesday they found out.

The car was used in a Summerville bank robbery attempt that went awry this morning — leaving the car’s interior red-stained and reeking of pepper spray. A dye pack hidden in the loot taken by three armed robbers from the Bacons Bridge Road Wachovia Bank exploded before the getaway vehicle got out of the parking lot, Summerville police said. The robbers abandoned the vehicle and fled.