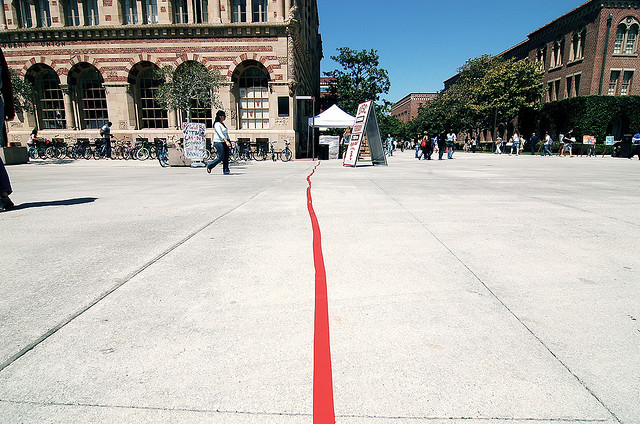 Image by Flickr user cameronparkins A "free speech" zone is taped off at the University of Southern California.

The American Civil Liberties Union﻿ has picked up on an interesting thread in how Charleston regulates street peddlers.

In a report, The Post and Courier﻿ discusses a series of incidents in May 2010 of a traveling fortune teller, Jonathan Spiel, who set up shop on city streets and, to be quick, was ticketed multiple times and arrested.

You can get background in the report here.

What's interesting, and not really raised in the paper's article, is that the ACLU argument is also that by not allowing such persons to gather on the sidewalk without being permitted and paid for, it's unduly limiting free speech — in that the city provides no "free speech or free association area.﻿"

From the ACLU's November 2010 newsletter, "Peddling Statute: The City of Charleston, in an attempt to 'clean up' the city, passed a peddling statute that is being used to prohibit constitutionally protected activity on the public streets and sidewalks without providing a free speech or free association area.

"After the ACLU entered an appearance on behalf of Jonathan Spiel, a busker who reads Tarot cards, the original charges of soliciting without a permit were dismissed. Now the city has cited Spiel for his lack of an encroachment permit. In order to read the Tarot cards, he uses a small folding table and a chair for which he does not have and cannot get an encroachment permit.

"These citations hamper Spiel’s exercise of First Amendment rights. We will file a motion to dismiss in the magistrate level “Livability Court” later this month. Rebecca Burke of the Charleston Bar is cooperating attorney.﻿"

But I get the sense that the ACLU may no longer be interested in a simple free speech zone and instead views the city's policy as a slippery slope.

Stay tuned on this one, as it could have large implications for the vibe of Charleston streets.