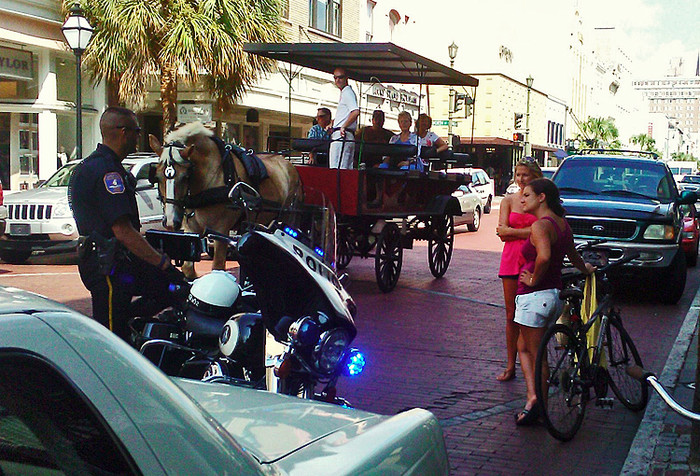 3:06 am on Sunday September 25, 2011 | Posted by Ken Hawkins
Charleston police once again look to up education of bicycle rules, with tickets (Update: Conundrum)

Image by Tom Bradford/Charleston Moves Two young women were stopped on King Street back in 2010 during a similar enforcement wave.

For the past three years the City of Charleston has looked to stop some local cyclists from flaunting rules about zig-zagging in traffic, jumping red lights, and riding the wrong way on downtown's many narrow one-way streets.

And so, the tickets are flowing again.

And while the tempo or the focus of the rules enforcement is much the same as year's past, The Post and Courier﻿ has an update report on what's up this time around; take a read here.

If you're not familiar with the rules of the road, brush up: City of Charleston bike rules and South Carolina bike rules. In a nutshell, if you're on a bike, you're traffic and not a pedestrian, as such you are generally expect to behave accordingly.﻿

Update September 25: The Post and Courier﻿ has followed up on the story in the form of an editorial that does a good job flushing out the obvious conundrum﻿ of enforcement vs. results.

Take a read of the column here.