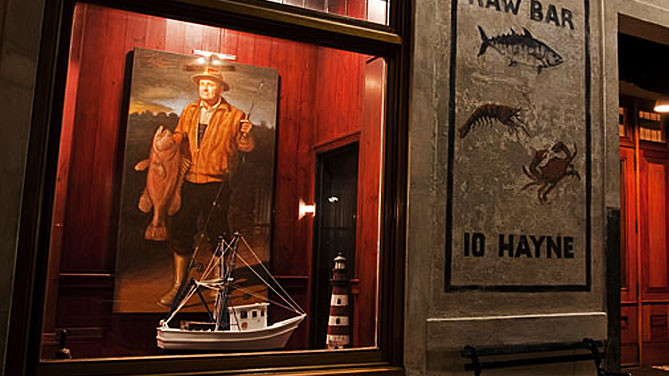 Update September 29, 1 p.m.: The Charleston City Paper has some additional details on the painting and the heist.

They also start to wonder if it's the same James Simpson that was voted their sexiest male bartender (mug shot, profile shot).

Update September 29: A suspect has been taken into custody; get the details and mug shot.

A man nabbed a six-foot by eight-foot painting from the front of Hank's Seafood in downtown Charleston on Sunday night.

But a security camera picked up the man as he fled into a car garage.

You can watch that footage at NBC News 2. -- If you look closely you can almost make out a huge grin on the guy's face.

No word on why the man nabbed the painting, but I think he just wants to be able to tell his friends about the three-foot grouper he reeled in.

Oh, and this isn't the first time Charleston has seen such a crime in recent years, back in October a pair nabbed paintings from Torch.