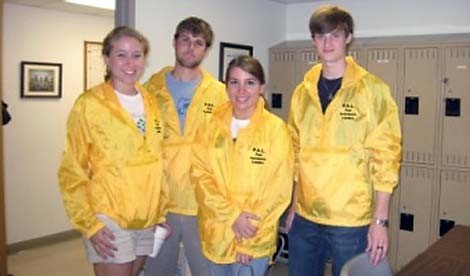 6:43 am on Sunday September 21, 2008 | Posted by Ken Hawkins
College students get proactive about Charleston's drinking problem

College kids can be seen wandering Market, East Bay, and King streets late into the night. But if you see some students in bright yellow shirts chances are they're not bored and drunk, but are looking to make sure someone's fun night out doesn't wind up as their worst weekend.

The Post and Courier reports on the group, in part:
Friday night, a five-student team on upper King Street diffused an argument before punches were thrown; helped two young women who were drunk and walking alone; and arranged a ride for a man staggering into traffic while singing "Nobody Wanna See Us Together."

The program was started this year to patrol bar-heavy areas in downtown from 10 p.m. to around 3 a.m. on weekends to help reduce alcohol-related problems.

Now, I know they kinda come across as college hall monitors, but getting mugged or beaten is a bit more serious than not having a hall pass.