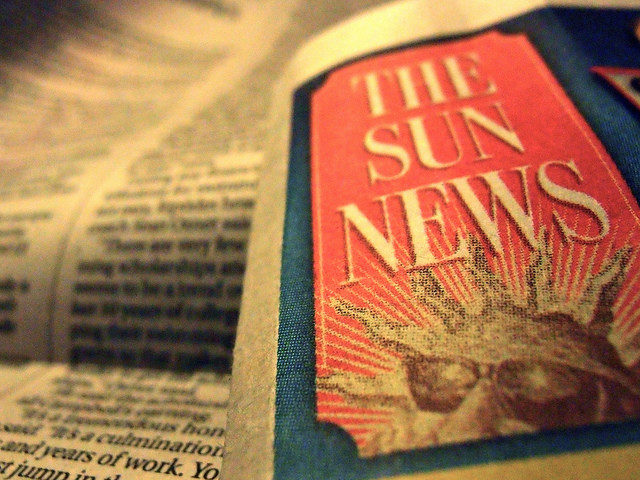 Update December 5, 2012: We got word via Twitter that today at 11 a.m. is the day the switch will be flipped and the Sun News will require a paid subscription to view the majority of its online content.

You can read a letter from the editor here.

Update November 7, 2012: It's official and the Sun News' Editor and Vice President spelled it out in a letter to the readers yesterday.

Now we, along with news companies across the company and the world, are reordering our business model to make sure we can deliver our online news and our printed products to readers at a reasonable cost. That’s why, beginning Dec. 5, we will begin offering bundled subscriptions for home delivery and online access through The Sun News + program. We announced the change on Monday because letters informing some subscribers were mailed over the weekend and we wanted to make sure all of our market got the word at the same time.

Those who don’t want home delivery also can sign up for online-only service for $6.95 per month, a price that is less than 25 cents a day. Users who don’t sign up will still have access to 15 articles per month, along with unlimited access to the homepage, section fronts and advertising.

Hop on over to the Sun News to read the full letter.

So there you have it. Your print subscription won't change, but if you were, primarily, an online consumer of their news, you'll either be limited to 15 articles a month or shell out $6.95 twelve times a year.

First report August 1, 2012: McClatchy, which owns five newspapers in South Carolina and one in Charlotte, announced that they will, "roll out a metered plan in the third quarter in five of [their] markets."

The announcement was made during their second quarter earnings report which reported a net income of $26.9 million which is five times more year to date from 2011. Additionally, McClatchy's report shows that print advertising was down 7.5% from last year. Digital advertising was up 8.5% from 2011.

In the McClatchy's press release they state:

After a number of experiments and analysis on pay models, we intend to roll out a metered plan in the third quarter in five of our markets.  We will offer readers a combined print and digital subscription package that will include access to web, certain mobile and replica editions for a relatively small increase to print home-delivery rates. We'll also offer online-only digital subscriptions to users after they read a certain number of pages. Once the first wave is launched, we intend to expand this model to our other markets beginning in the fourth quarter of this year.

Cost of the pay wall wasn't addressed in the press release and neither were specific papers named. McClatchy only mentioned "markets." Five of which are going pay in the next three months and the remaining properties are slated to follow in the fourth quarter of this year.

As stated above, McClatchy owns five newspapers in South Carolina and so far three, The State, The Greenville News and The Post & Courier are already charging for some if not all of their content.

A few months ago our sister site in Charleston reported on The Post & Courier going pay. The Post & Courier's pay wall hits after a user visits five articles and then one is prompted to pay up or be on their way or, as TheDigitel Charleston reports, "...visitors will be offered the opportunity to subscribe to The Post and Courier with all of the advantage benefits, or opt for a digital only subscription at $10 a month or $99 a year. Our mobile and tablet sites will be metered as well."

The aim of allowing five article views is a tactic to allow casual readers a chance to view and consume the news but will hit the news junkie hard. However...there are ways around all of this. Click on through to our sister site to read all about P&C's pay wall implementation and how one might get around it.

Will you be paying to read The Sun News online? Answer our poll question over on Facebook.