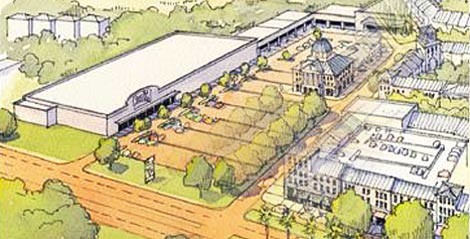 Image by City of BeaufortImage by 20080730redevlopmentplan.jpg A plan being used by the City of Beaufort aims to redevelop some of its strip malls to make the area more urban and bike- and pedestrian-friendly (current look is on left; planned look is on right).

Real estate owners and developers in a Wednesday meeting did not like the taste of a City of Charleston plan to renew several "zones" in West Ashley and James Island (one more notable area is the Citadel Mall).

The plans would try to increase the ability to live and work in the targeted areas, essentially peppering mini-downtowns throughout the city.

City officials hope the plan would not only increase the attractiveness of town and clean up the environment some, but also increase the tax base.

But, as The Post and Courier reports, the city planners got little love:
"This really horrifies me," said Jerry Garfinkle, representing Cisco's Cafe and Sunfire Grill in West Ashley. "If I build 20 apartments above a restaurant, I think you'd have 20 empty apartments."

This is likely the first step in a long road. So if you have an opinion, make yourself heard.

Update July 31: The Post and Courier has lengthened the story in their a.m. edition.