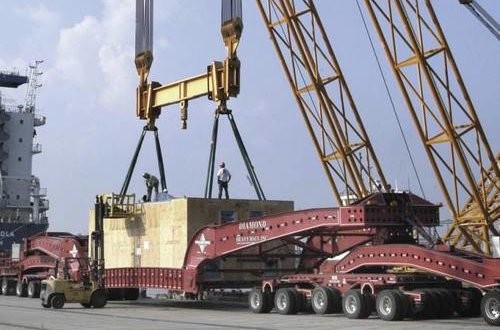 Breakbulk cargo - that is, anything not traveling in a metal shipping container - is getting a big lift at the Port of Charleston.

The new service makes calls across the Middle East on its regular rotation while offering customers the flexibility to sail additional routes based on demand. Liberty has deployed three, 6,100-car-unit vessels on the service, which makes its next Charleston stop in mid-October with the M/V Prestige New York.

“The Port of Charleston has proven experience and resources to handle any type of breakbulk or rolling stock,” said Mike Chapell, director of operations at Liberty Global Logistics. “The potential is great to grow Liberty’s core business here.”

Additionally, a local barge-mounted heavy-lift crane serving the port's oversize and overweight cargo has significantly increased its load capactiy. The Charleston Giant, operated by local company Charleston Heavy Lift, LLC, has increased its certified load capacity from 450 short tons (900,000 pounds) to 500 short tons (one million pounds). The floating crane is the largest of its kind in the Southeast and routinely moves cargo like turbines and generators, cranes and construction components.

“From the largest shipment to the smallest project, the Port of Charleston has the people, facilities, services and experience to handle any-size load,” said Paul McClintock, senior vice president and chief commercial office at the South Carolina State Ports Authority (SCSPA), which owns and operates the Port of Charleston and the Port of Georgetown.

The Port of Charleston offers four, rail-served terminals to handle diverse breakbulk and project cargo needs and has invested personnel and resources toward growing the non-container segment, establishing a full-time position devoted to non-container sales and marketing last year. The SCSPA Board also approved more than $20 million in improvements to Columbus Street Terminal that will be completed in April 2011.

Non-containerized cargo in Charleston and Georgetown is expected to climb 53 percent during the 2011 fiscal year, which ends June 30 of next year.

For more information on the Charleston Giant, visit www.charlestonheavylift.com.