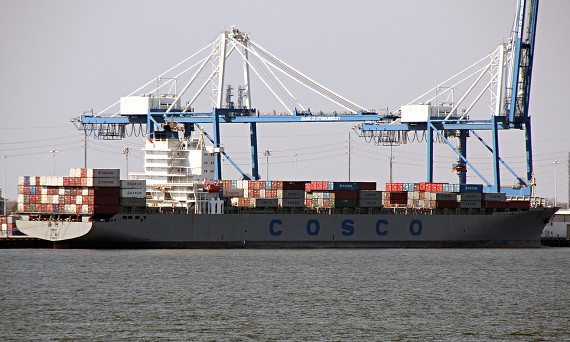 Things are looking up for the State Ports Authority's Charleston ports.

The SPA announced today that business for the month of March was up 24.4 percent compared to the same month last year and that the new shipping service will bring 52 ships a year through Charleston's harbor. Charleston will soon become the last U.S. port outbound on CSAV's weekly America Express Service to markets in northern China and South Korea.

Here's all the details from the press release:

Charleston, SC – At its monthly Board meeting today, the South Carolina State Ports Authority (SCSPA) announced double-digit volume increases during March, along with the addition of a new service between Charleston, Northern China and South Korea.

“These volume gains are encouraging and significant,” said Jim Newsome, president and CEO of the SCSPA. He attributed the growth to restocking of inventories, export market growth and the SCSPA’s aggressive new business development efforts. “As ocean carriers look to enhance or start new services, Charleston is firmly on their radar screen,” Newsome said.

Demonstrating the SCSPA’s focus on bringing new business and services to South Carolina’s ports, Charleston will be the last U.S. port outbound on CSAV’s new America Express Service, or AMEX. CSAV (Compañía Sud Americana de Vapores) of Chile is the largest ocean carrier in Latin America and, founded in 1872, is one of the oldest shipping companies in the world.

Paul McClintock, senior vice president and chief commercial officer of the SCSPA, highlighted Charleston’s advantages. “The strategic placement of Charleston as the last U.S. port outbound highlights this region’s export potential to markets in Asia. With the deepest channels in the region, as well as ample capacity and equipment, Charleston is a compelling place to do business. We look forward to growing CSAV’s already substantial presence in Charleston.”

The service launches with the first sailing on May 16 from Ningbo, China with additional port calls at Shanghai, Qingdao, Xingang, Busan, Kingston, Caucedo and Cartagena. The first Charleston call is expected on June 24 at the Wando Welch Terminal.