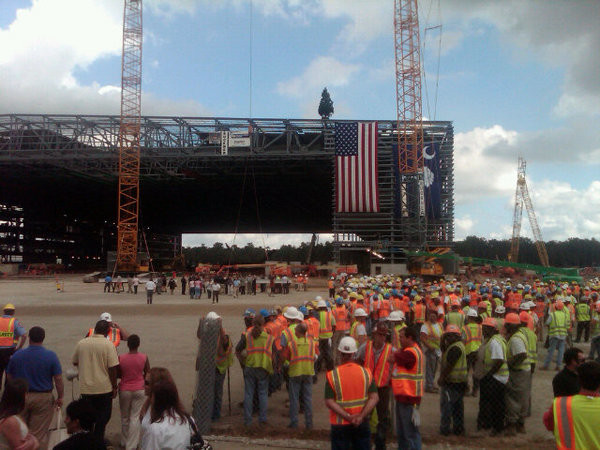 Image by City of North Charleston The tree is placed atop in the "topping out" to ward the building from evil spirits and spawn growth, yes, it's the same pagan tradition that spawned Christmas trees.

Today, September 24, marks a pivitol stage in Boeing's 787 final assembly plant in North Charleston: the final piece of steel was laid in the the 1.1 million-square-foot plant and now the interior buildout begins.

It was the "topping out" momemnt.

"By this time next year, the Final Assembly building will be complete, and we will have begun production of the first South Carolina-built 787 Dreamliner. That is tremendous – from green-field site to airplane production in about 18 months," said Marco Cavazzoni, vice president and general manager of 787 Final Assembly and Delivery.

Construction on the new facility is on schedule, with airplane production due to begin in July 2011 and first delivery in first-quarter 2012. At full production rate, Boeing will assemble and deliver three 787s per month from South Carolina to customers around the world. The South Carolina Final Assembly facility will be one of only three in the world producing twin-aisle commercial jetliners.

And that's where my info ends.

The Charleston Regional Business Journal has an excellent write-up and photos from the ceremony; read that here.

Keep up on local Boeing news on our topic page.