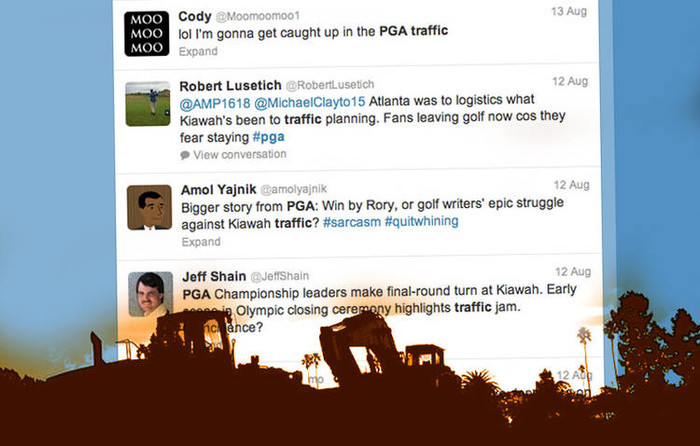 4:10 am on Sunday August 19, 2012 | Posted by Ken Hawkins
PGA traffic nightmare rolling into I-526 debate as proposal gets more dollars

Image by Staff illustration, base image by Flickr user skalasinc A quick cross section of traffic frustration during the PGA championship on Twitter. It means bring on the construction debate.

Northern Ireland's Rory McIlroy set a record at the 2012 PGA Championship by taking the title with a record lead of eight strokes — still that news was overshadowed locally by the buzz about just how awful traffic was.

It seems that occurrence won't sit in a vacuum, rather the Kiawah Island traffic overflow will once again be pulled into the Johns and James islands traffic debate.

In the past the Kiawah Island traffic debate has revolved around the proposed development of a Sea Islands Parkway that could take the form of a de facto expressway from James Island through Johns Island to Kiawah and Seabrook islands.

In the post-Kiawah PGA period, the battle lines are shifting after the management change in the much debated I-526 expansion with the State Infrastructure Bank voting last week to add $138 million dollars to fund the completed Interstate loop around Charleston for at total estimated cost of $558 million.

The biggest shift is one of proposed futures: previously the discussion was shaped around a logic of "Building I-526 will bring unwanted growth and more traffic that will clog the new road, resulting in a null sum gain.", and now the strategic line of supporters appears to be "The PGA Championship traffic clog is evidence that the growth is coming either way and therefore, I-526 must be built."

What's it mean? Brace for more I-526 debate stories.