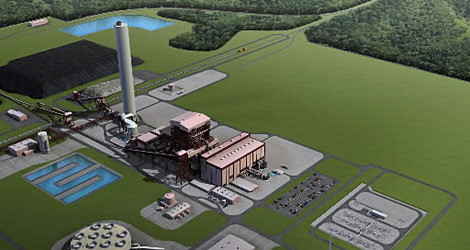 Image by Santee CooperImage by 20080610powerplant.jpg The proposed Pee Dee power plant has received much criticism as too great a risk to the environment. Santee Cooper has countered that it's a totally modern clean-as-can-be facility.

A permitting meeting will be held for a proposed coal-fired power plant in Florence County (detailed map) that would generate some 1,320 megawatts of electricity, and emit some 57 pounds of mercury a year.

The meeting is being spurred by the S.C. Department of Health and Environmental Control's Bureau of Air Quality receiving an application from the power plant's builder, Santee Cooper, to determine the maximum amount of pollution it should be allowed to emit.

The application is newly required as a March 2005 rule by the EPA was struck down. That rule allowed coal-fired power plants to "cap and trade" pollution. Essentially allowing less-dirty plants to trade their unused pollution quota to more-polluting plants.

The rule was struck down by a Federal Appeals Court in February for being deemed insufficient to protect the health of people living near dirtier coal plants.

The meeting will be held July 22 at 6 p.m. at the Hannah-Pamplico High School. The public will have a chance to ask questions.

The proposed power plant will likely produce a large amount of mercury in area that already show high levels of the potent toxin. The Post and Courier did an extensive report on mercury in South Carolina several months ago.

On July 1 the utility said it intends to add a baghouse to reduce mercury emissions at the Pee Dee Energy Campus to no more than 57 pounds per year (a 95 percent removal). Previously the utility planned to release 69 pounds.

Mercury can be very persistent and too much pollution in the Florence area could very plausibly drift into Charleston's fish and water supply. But we also need the electricity to run out lights, A/C, and computers.

Update June 11: We just stumbled on this at the Southern Environmental Law Center:
Just last week, a similarly sized plant, proposed by Dominion Power in Wise County, Virginia, was given a permit to emit only 4 pounds of mercury – or ten times less than what Santee Cooper says is the “maximum” it can do.

That's a pretty shocking difference. Let's see what comes out of the meeting.