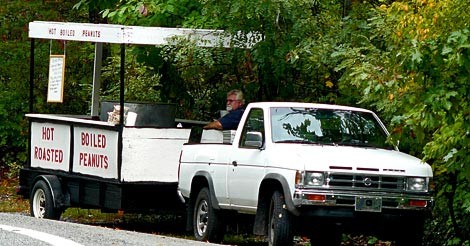 4:25 am on Thursday July 24, 2008 | Posted by Ken Hawkins
North Charleston gives the squeeze to roadside vendors

Image by flickr user JeffersonDavisImage by 2008024vendor.jpg Roadside vendors like this one in Greenville are nearly as traditional as the items they sell.

Roadside vendors have historically not had much trouble in finding a spot to pull off the side of the road to sell their watermelons, shrimp, or other goods. Generally they set up in the area between where the pavement and the owner's land, in the public right of way owned by the government for any potential miscellaneous used (think telephone polls, pipes, etc.)

But a new North Charleston ordinance requires that the vendors get the OK from the land owner's next to the right of way, be inspected, and pay $25.

If property owners are still having trouble, city council could move to try and eject the peddlers from city limits all together.

The Post and Courier does some pretty in-depth reporting on the issue, an excerpt:
Council members were concerned about the ability of a pressed codes enforcement staff to handle the new ordinance. They asked for a report at the January 2009 meeting on how well it's worked. Council member Steve Ayer said he would support the ordinance to see if it worked. "If it doesn't work, we're going to ban them and let them go down the road."

Generally the larger, permanent stands have an agreement to the land and would not be affected.