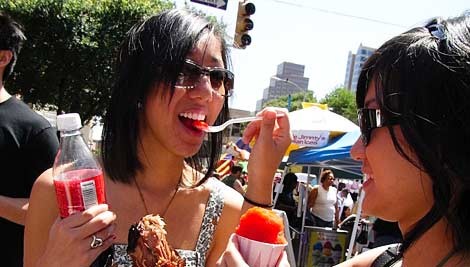 11:31 am on Thursday July 24, 2008 | Posted by Ken Hawkins
Charleston seeks to push street vendors off much of King Street

Image by Flickr user yummiec00kiesImage by 20080724italianice.jpg A hot day for tourists with no Italian ice? How barbaric.

Original post: Italian ice, along with hot dogs, could all but disappear from much of King Street, under a new ordinance being considered by Charleston City Council.

The council wants to push the street vendors out to free up space on the all-to-narrow sidewalks.

Live 5 News reports that street vendors are none-to-happy, quoting George Lopez who owns Giovanni's Italian Ice vending company:
That's our Madison Avenue. That's our Fifth Avenue here in Charleston. It brings not only the tourists it brings the locals to shop, and it would hurt us a great deal.

The regulation would ban vendors from King Street on Carolina to Broad streets (map is below).

But, I'll ask if the street vendors are part of the King Street aesthetic, then maybe we should uproot all those palmettos, because I know they get in the way.

Personally, I've always believed they should narrow the road to one lane, and widen the sidewalks, put in a bike lane, and keep the parallel parking. Then we'd have room for the vendors, slow moving tourists, bikes, and, yes, even some palms.