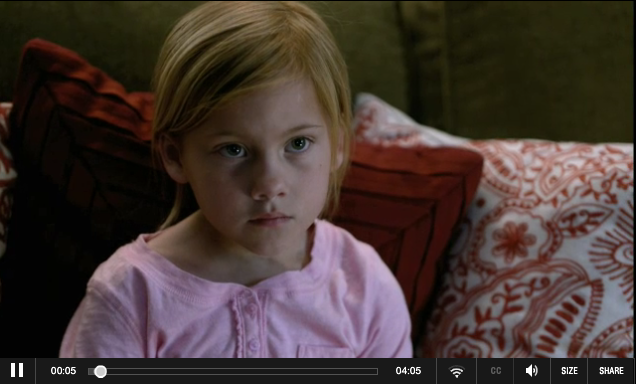 (Scroll to bottom for updates.)

First Report 6/5/12: Landing an acting gig on a network TV show is a dream for many actors, but one local seven-year-old girl has made that dream a realization.

Ever since Morgan Hinkleman was 3-years-old, the camera has loved her and she has loved posing for the camera. This led to the start of some modeling and it wasn't until about 5 she discovered a true passion for acting.

Acting, singing, and modeling are top on her list of favorite activities, but Morgan also enjoys her time on the field playing soccer and t-ball as well as swimming at the beach, pool, and water park. Living at the beach has its perks.

Morgan finds herself in the pilot episode of one of NBC's biggest 2012 fall dramas, Revolution. While Hinkleman's roll of the younger version of the protagonist of the show might be small, who's to say there won't be flashbacks that feature Ms. Hinkleman as Charlie Matheson.

Revolution is produced and directed by some very familiar names in the sci-fi drama genre, the two biggest being Iron Man 1 & 2 director Jon Favreau and  J.J. Abrams who is known for a couple small projects, like, LOST, Fringe, Super 8 and the theatrical Star Trek reboot

Our entire way of life depends on electricity. So what would happen if it just stopped working? Well, one day, like a switch turned off, the world is suddenly thrust back into the dark ages. Planes fall from the sky, hospitals shut down, and communication is impossible. And without any modern technology, who can tell us why?

Now, 15 years later, life is back to what it once was long before the industrial revolution: families living in quiet cul-de-sacs, and when the sun goes down, the lanterns and candles are lit. Life is slower and sweeter. Or is it?

On the fringes of small farming communities, danger lurks. And a young woman's life is dramatically changed when a local militia arrives and kills her father, who mysteriously - and unbeknownst to her - had something to do with the blackout. This brutal encounter sets her and two unlikely companions off on a daring coming-of-age journey to find answers about the past in the hopes of reclaiming the future.

From director Jon Favreau ("Iron Man," "Iron Man 2") and the fertile imaginations of J.J. Abrams and Eric Kripke ("Supernatural"), comes a surprising "what if" action-adventure series, where an unlikely hero will lead the world out of the dark. Literally.

Revolution is scheduled to air Monday night following The Voice. Check out the trailer for Revolution below, you can see Morgan in the first few seconds, the trailer also features Gustavo 'Gus' Fring (Giancarlo Esposito) of AMC's Breaking Bad being, well, bad.

Update 8/15/12: Where should a film crew look to film a post apocalyptic amusement park scene? Why not at the abandoned Hard Rock amusement park?

The new NBC sci-fi drama Revolution has been filming scenes at the old abandoned amusement park on 501. Really the old Waccamaw Pottery buildings would be perfect too. We're not sure what is being filmed or who from the cast might be in town but this post over at RevolutionTVshow.com suggests that they might only be filming some coverage sequences.

The casting call was put out by Double A Casting, they are based out of Wilmington and have provided casting for shows 'One Tree Hill', NBC's 'Revenge' and of course Digitel favorite Eastbound and Down.

A big thanks and generous hat tip goes out to Jennifer Sellers (@MyGreenGlasses) for her Tweet alerting us to the presence of the NBC film crew: