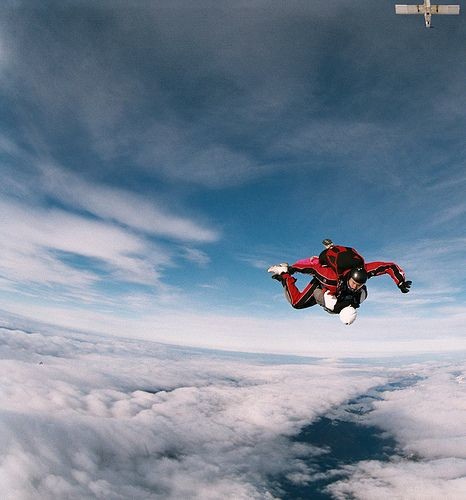 A 49-year-old skydiving instructor suffered a fatal heart attack on Saturday during a tandem jump with a first time skydiver. The first time skydiver, who is said to be an active military member in his 30's, steered to the ground safely, where he performed CPR on the unconscious instructor.

The Herald Online ran an article. Here's an excerpt.

The first-timer, described as an active U.S. military member, took over after the instructor lost consciousness, authorities said. The pair were attached to the same parachute in a form of skydiving known as a tandem jump, in which instructors are strapped to the backs of their students.

The instructor, identified as George "Chip" Steele of Sumter, became unresponsive in the final moments of a 6-minute jump -- well after he had pulled the rip cord, authorities said.

Once on the ground, the diver tried to revive Steele using CPR. But too much time had likely elapsed for the efforts to do any good, Chester County Deputy Coroner Keith Hudson said.

Authorities did not release the first-timer's name on Saturday night. But Hudson credited him for keeping composure. He said the man is in his 30s.

"He kept control," Hudson said. "His military experience helped him out a lot as far as making it to the ground safely."

Steele worked for Skydive Carolina, a business located at the Chester County Airport since 1986. He had made thousands of jumps over a lengthy career, general manager James LaBarrie said.

"There was no equipment malfunction whatsoever," LaBarrie said of Saturday's incident. "From what we understand, the instructor evidently had something go wrong medically."

Something like this makes you stop and think. Of course it's tragic. But Steele died doing what he loved. And for the novice jumper to land safely, well, it's pretty remarkable. It's an awful scenario that could have turned out worse.

The FAA estimates 350,000 people complete more than three million jumps in a typical year, with an average of 30 people dying in various parachuting accidents. That translates to roughly one person per 100,000 jumps. So the numbers are in your favor. But still, after hearing stories like this one, first time skydivers will probably think twice about leaping out of a plane that's 13,000 feet in the air.

You have to admit it looks pretty fun, though. Here's a video of a first-time jumper living it up at Skydive Carolina.