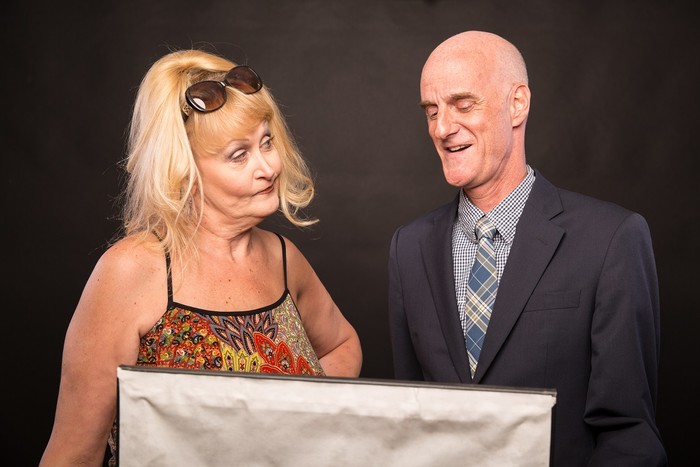 A new international hit comedy is making its way to one of Charleston’s historic theatres. The Footlight Players will perform “Bakersfield Mist” from Sept. 9-25 at Footlight Theatre, 20 Queen St.

“Bakersfield Mist” is the story of Maude, a 50-something unemployed bartender living in a trailer park who buys a painting for a few bucks from a thrift store. Despite almost trashing it, she’s now convinced it’s a lost masterpiece by Jackson Pollock worth millions. But when world-class art expert Lionel Percy flies over from New York and arrives at her trailer home in Bakersfield to authenticate the painting, he has no idea what he is about to discover. Inspired by true events, this hilarious and thought-provoking new comedy-drama asks vital questions about what makes art – and people – truly authentic.

The production is directed by Robin Burke and stars Lorilyn Harper as Maude and Jimmy Flannery as Lionel.

This play is relatively new; it had its first staged reading in 2011. The newness of the play was appealing to Brandenburg, he said, as the Footlight team was putting together shows for its 85thseason.

“I was initially drawn to the piece because it is so fresh,” he said. “I like the idea of blending a new work with some of the classic works we are presenting. However, it was selected to be a part of Footlight’s 85th season, not just because it is a new offering, but because it is a new, well-written, humorous, thought-provoking story. I am excited to have it on our lineup and look forward to having our Footlight audiences experience this ride with us.”

That is the excellent mindset, nonetheless is just not help to make every sence whatsoever preaching about that mather. Virtually any method many thanks in addition to i had endeavor to promote your own article in to delicius nevertheless it is apparently a dilemma using your information sites can you please recheck the idea. thanks once more. ahh smile dental care

hello!! Very interesting discussion glad that I came across such informative post. Keep up the good work friend. Glad to be part of your net community. cccam server

Excellent information on your blog, thank you for taking the time to share with us. Amazing insight you have on this, it's nice to find a website that details so much information about different artists. healthcare reviews

That appears to be excellent however i am still not too sure that I like it. At any rate will look far more into it and decide personally! voyance telephone

Great survey, I'm sure you're getting a great response. http://theerectondemand.co

Thank you so much for sharing this great blog.Very inspiring and helpful too.Hope you continue to share more of your ideas.I will definitely love to read. Music

When you use a genuine service, you will be able to provide instructions, share materials and choose the formatting style. san francisco personal injury lawyers

Wow, this is really interesting reading. I am glad I found this and got to read it. Great job on this content. I like it. digital marketing traning in delhi

Took me time to read all the comments, but I really enjoyed the article. It proved to be Very helpful to me and I am sure to all the commenters here! It’s always nice when you can not only be informed, but also entertained! Revitol

Nice knowledge gaining article. This post is really the best on this valuable topic. Provillus

I would like to thank you for the efforts you have made in writing this article. I am hoping the same best work from you in the future as well.. http://www.revitolcellulitecream.us