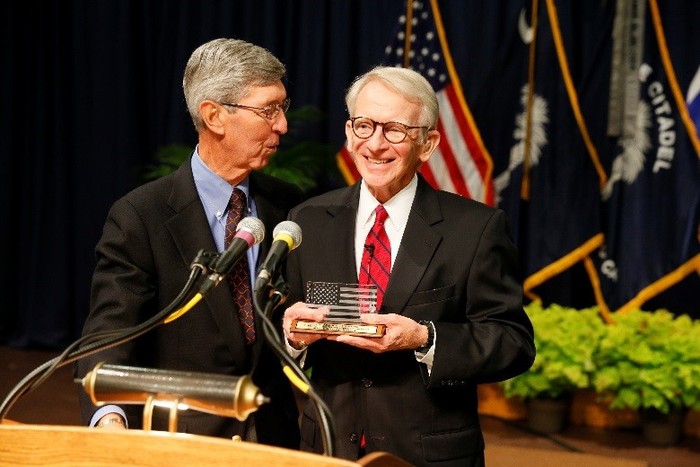 CHARLESTON, SC – A mayor who has set unprecedented values, bridged cultural gaps and fostered significant urban development was honored as the recipient of one of The Citadel’s most prestigious awards. Mayor Joe P. Riley, Jr., a graduate of the Class of 1964, was selected to receive the 2015 Krause Center Award for Distinguished Service, Leadership, and Ethics.

The award is presented annually by The Citadel's Krause Center for Leadership and Ethics to a Citadel graduate who exemplifies the highest ideals of leadership through integrity and service to others.

“As we lead, we must have a clear, moral, ethical understanding of where we are seeking to go and why,” said Riley. “A leader must always be listening.”

Riley is widely considered one of the most visionary and highly effective governmental leaders in America for his almost 40 years of service to the city of Charleston. He served in the South Carolina General Assembly from 1968 to 1974 and is one of the longest-serving mayors in U.S. history.

Riley was presented the award by Mr. Bill Krause on March 13 in front of the South Carolina Corps of Cadets and Citadel alumni, faculty and staff. Krause, a graduate of the Class of 1963, is a distinguished alumnus who supports the college’s leadership development curriculum and for whom the Krause Center for Leadership and Ethics is named.

Riley is often credited with saving Charleston after Hurricane Hugo in 1989, aiding the stranded and garnering millions of dollars to repair the city. His administration is also credited with developing economic growth strategies that have earned Charleston a global reputation as one of the most desirable places in which to do business, live and visit.

After retiring from his elected position, Riley will return to his alma mater, The Citadel, to be the first occupant of the Joseph P. Riley, Jr. Endowed Chair of American Government and Public Policy.

A selection committee comprised of 10 members representing departments and councils from across The Citadel community participated in the selection process. To be considered, a nominee must be a graduate of The Citadel who:

• Exhibits The Citadel's Core Values of Honor, Duty, Respect in their private and professional life

• Embodies the values and ethical character of a Principled Leader

• Exemplifies service before self in actions and deeds (profession, career, community service)

• Serves as a role model in their professional and personal endeavors

Charleston, South Carolina. The Citadel offers a classic military college education for young men and women profoundly focused on leadership excellence and academic distinction. Graduates are not required to serve in the military but about 30 percent of each class commission as officers in every branch of U.S. military service. Graduates of The Citadel have served the nation, their state and their communities as principled leaders since the college was founded in 1842. The Citadel Graduate College offers more than 50 Master's degrees and graduate certificates in a wide range of disciplines, plus six undergraduate programs, through an all-evening schedule. Some graduate courses are available online.