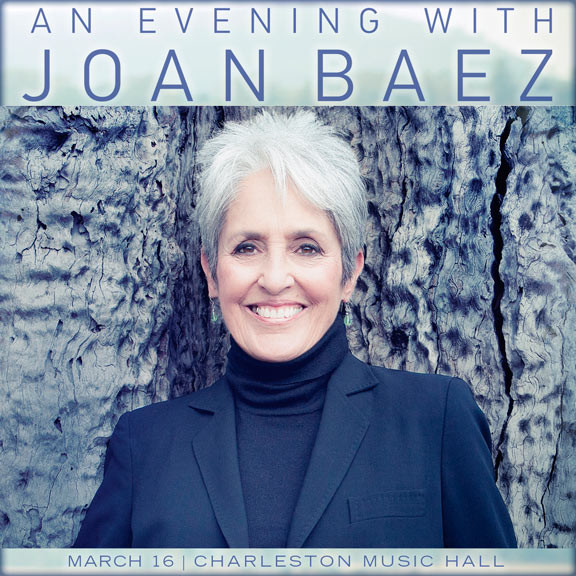 Joan Baez has been as busy as ever in the five years since she celebrated the landmark years of 2008-2009, the 50th anniversaries of her legendary residency in 1958 at the famed Club 47 in Cambridge, and her subsequent debut at the 1959 Newport Folk Festival.

In addition to multiple tours of the US and abroad, the recent past has included the induction of Joan’s 1960 debut Vanguard LP by the National Recording Academy into the Grammy® Hall Of Fame and the presentation to her of the inaugural Joan Baez Award for Outstanding Inspirational Service in the Global Fight for Human Rights at Amnesty International’s 50th Anniversary gathering in 2012.

She remains a musical force of nature whose influence is incalculable – marching on the front line of the civil rights movement with Martin Luther King, inspiring Vaclav Havel in his fight for a Czech Republic, singing on the first Amnesty Interna­tional tour and more recently, standing alongside Nelson Mandela when the world celebrated his 90th birthday in London’s Hyde Park.  She shined a spotlight on the Free Speech Movement, took to the fields with Cesar Chavez, organized resistance to the Vietnam War, then forty years later saluted the Dixie Chicks for their courage to protest the Iraq war.  Her earliest recordings fed a host of traditional ballads into the rock vernacular, before she unselfconsciously introduced Bob Dylan to the world in 1963, beginning a tradition of mutual mentoring that continues to this day.

Amongst the many honors bestowed upon her, she is the recipient of the Lifetime Achievement Award, the greatest honor that the Recording Academy can bestow (2007).  Day After Tomorrow, her 2008 album was praised by critics and nominated for a Grammy. Its release was followed by the PBS American Masters premier of her life story, Joan Baez: How Sweet The Sound.