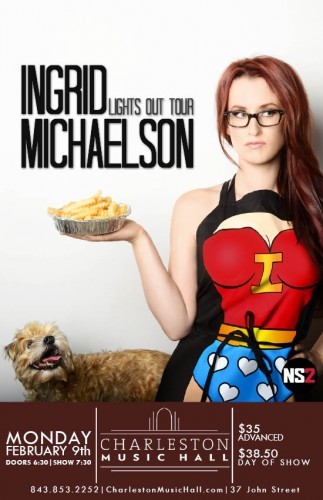 In the past two years, Ingrid Michaelson — who’ll drop her fifth studio album, “Lights Out” (Cabin 24/Mom+Pop) on April 15th — has vaulted from overachieving indie-pop sweetheart to a bona-fide pop star. Her last release, “Human Again,” debuted at No. 5 on the Billboard album chart (plus No.1 on iTunes).

This achievement merely crowned the considerable success Ingrid had already earned with her previous compositions: beautiful, idiosyncratic songs that have been prominently featured in popular films, television and on regular rotation in commercials. Her DIY approach to making music — composing her own songs, co-releasing albums on her Cabin 24 imprint, building an organic following through music-licensing, and back in her MySpace days (where she was discovered in 2006), promoting herself — was a slam-dunk. Now, it had evolved into a well-oiled machine, The New York Times even weighed in, declaring her songwriting “smart,” her tunes “irresistible” and her live show “seamless.”