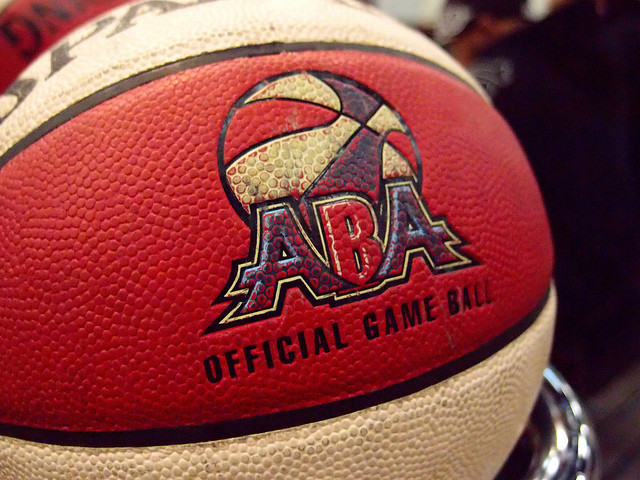 At one of the recent home games for the South Carolina Warriors, my buddy Happy Hour Matt started telling me about some of the crazy rules they have in ABA basketball.

Most people don't pay attention to the announcer during the pre-game when he explains these special exceptions to standard basketball rules. But they are designed to add to the competitive balance and entertainment value of the games. Granted, they won't help a team recover from a 100 point deficit, but they could swing a close game very easily.

The 3-D light at the Warriors gameThe "3-D Rule"
If the possessing team loses the ball in their back court, from either turnover or held ball violation, 3-D scoring is in effect. This is indicated to the crowd by multi-colored lights either at the scorer's table or on the scoreboard. The team that gained possession in the turnover can get an extra point on their next field goal or they get an extra free throw if fouled. Either of which would also end the  3-D period. The 3-D Rule also ends if they lose possession of the ball.

No Foul Outs
A player can't foul out of the game. However, if a player becomes a "6th Foul Player", the opposing team automatically gets a free throw (or an extra free throw if it's a shooting foul) and automatic possession of the ball by throw-in near the spot of the foul. The offended team can choose any of the current 5 players to shoot the extra free throw. There are no "One and One" free throws in the ABA.

4 Point Field Goals & Back Court
Any shots made from the back court are counted as four points. Shooting player has to be behind, not on, the half court line. The back court count is seven seconds as opposed to the more traditional ten second count.

There's a handful of other special rules with regards to timeouts and overtime play. You can see them all over on the official ABA website. In researching this story, I came across this blog post which describes a very possible scenario with ABA rules where a team could score seven points and get possession of the ball: