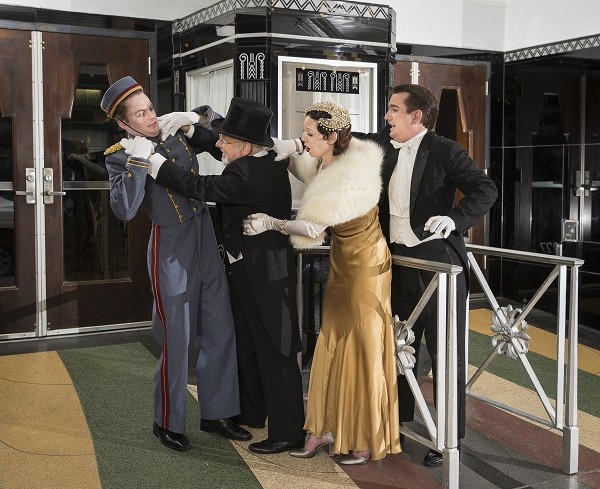 8:48 am on Monday April 4, 2016 | Posted by HAF Creative
Footlight Players Bring Comedy ‘Lend Me a Tenor’ Back to its Historic Stage

It’s the biggest night in the history of the Cleveland Grand Opera Company. Unfortunately, Tito Merelli, a renowned tenor about to make his North American premiere, is incapacitated by a series of calamities and someone is forced to impersonate him. What follows is a chain reaction of mistaken identity, mixed signals and absurd plot twists that are as funny as they are ridiculous.

“Ken Ludwig’s ‘Lend Me a Tenor’ is considered by many to be one of the best farces ever written,” said director Don Brandenburg. “A farce is typically constructed around simple, basic comedy with plenty of slapstick, mistaken identities, bawdy misinterpretations and fast-paced opening and closing of doors. There is not much room for restraint in a farce. Without any regret, characters become caricatures, and the actors are relied on more for their split-second timing and pratfalls than for subtle emotion.”

This is the third time The Footlight Players has produced this play – the first was in 1992 and then again in 2000. Brandenburg directed the performance in 2000. “Now we’re back with another strong cast that I am sure will hit all the right notes,” he said.

E. Karl Bunch will have performed in all three productions of “Lend Me a Tenor” at Footlight. In this upcoming show, he plays the role of Henry Saunders, general manager of the Cleveland Grand Opera Company, the same role he had in the previous two shows.