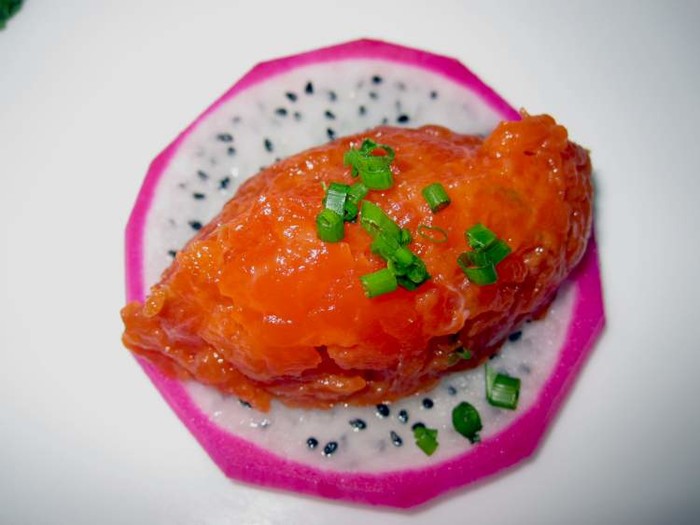 Before Social Wine Bar hired Svec from the Chicago restaurant scene, the establishment was best known for its artesian, brick oven pizzas and extensive (if not gratuitously exotic) wine selection.

Now that the executive chef has made the Holy City his new home, Social is holding back no punches in a quest to become a premiere spot for all of your wine-and-dine needs.

I had the privilege to sit down for a one-of-a-kind dinner paring with meals from Svec's revamped menu and wines from Brad Ball's, Social's in-house sommelier and proprietor, laundry list of vinos from around the world.

The first and second courses started out with a ponzu and truffle tuna sashimi that practically melted in your mouth. It came with a candied lemon garnish, though, that could throw an unsuspecting diner completely off.

The sashimi was then followed by a salad comprised of local heirloom tomatoes, fennel panzanella, house ricotta and tomato gelee. As intimidating as it sounds, the combination was fresh, tangy and perfect as a main course salad.

Third and fourth courses threw me for a loop when the chef produced a skewer of tempura fried shrimp wrapped in whole basil leaves with a roasted red pepper sauce. Afraid that the entire dish would be overpowered by the taste and aroma of basil, I was surprised to find the basil around the shrimp was very subdued. The red pepper sauce, albeit explosive in taste, complimented the shrimp well.

Next came my favorite dish of the night: a pan seared duo of sea scallops with roasted oyster mushrooms, rah tham and an amazing leek wonton that blew my mind. The entire dish gave off a very rustic feel with the mushrooms and leek elements, but the scallop was tender and cooked perfectly. My only gripe would be the fact that the scallop was a tad bit salty for my tastes.

I reached the pinnacle of  the parings when I was brought a plate of salmon three ways: A tatare variation on dragonfruit slices, bourbon cured salmon with arugula and a pan-seared fillet with anise and lotus root. This was a real treat, not only because the course was not on daily menu, but I'd never laid eyes on dragonfruit until that night. The trio complimented one another perfectly and it didn't hurt that Ball topped it off with a Slovak wine.

That course was followed by an interesting take on steak and potatoes. Hangar steak, traditionally a tougher, leaner steak used in fajita dishes, topped a bed of roasted fingerling potatoes, julienned green apple and scallion aioli. The meat was tender and cooked medium rare (as all steak should be cooked), while the potatoes were spot on.

The seven-course paring was rounded out with a most decadent four-layer chocolate mousse created by Svec's future wife and accomplished pastry chef. It was a marriage of chocolate, Oreo, peanut butter and straight-up love. Coming from a person who avoids sugar like a type-2 diabetic, I felt compelled to finish as much of the mousse as I could.

In the end, I always take the time to savor and appreciate opportunities to consume and critique food from individuals that exude both passion and sheer technical skill through their cooking. In regards to chef Svec's vision and determination, I hope that Charleston is ready.

Social is at 188 East Bay Street in downtown Charleston.