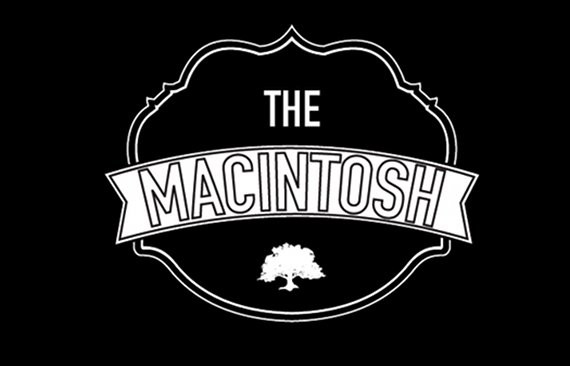 5:10 am on Friday November 11, 2011 | Posted by Amanda Click
Indigo Road partners with Jermiah Bacon in new venture: the Macintosh (update: more on The Mac)

Image by the Macintosh

Update November 11: On a recent solo dining experience at The Macintosh's bar, contributing reporter Cameron Pollard had this to say about Upper King's hottest new restaurant:

I think above all what would bring me back was the ambiance.

Before the food even came out, I was imagining coming back with my friends, having a drink at the bar and making memories. The casual ambiance of The Macintosh contrasted, nay, balanced the great food and service of a fine dining restaurant. It lacked the stuffiness that upscale dining is known for and felt more like a cozy neighborhood bar. The dim, warm lighting, exposed brick, tables made from recycled wood and friendly, smiling staff eases you into your seat as well as your meal.

The fall menu selections were fantastic. There was something for everyone from farm-fresh veggies to buttery, succulent deckle for the true carnivores. The food combinations at The Mac are unlike anything found elsewhere in Charleston. Each dish features bold, inventive flavors and incorporates locally sourced produce and meats. Presentation. is impressive - each course looks more delicious than the one before it and the colors of each ingredient pop off of the stark white plates.

Highlights of my meal were, surprisingly, my appetizer and dessert. The Housemade Ricotta Gnudi (it melted in my mouth and was just amazing) and the warm Apple Cake with a scoop of cinnamon ice cream on the top. If you have a sweet tooth, be sure to save room for dessert at The Mac. When my server set down the cake, the smell of apples and cinnamon wafted up toward me and I already knew I was about to take a bite of heaven.

The service, the comfort, the design and the food are all a cut above the rest at The Macintosh.

Update November 2: The feedback from all who have had the opportunity to dine at The Macintosh has been that it is fantastic, flavorful and fresh.

The Charleston City Paper's Robert Moss has penned a review of his recent meal at the new restaurant, helmed by Johns Island native Jeremiah Bacon, which gives high praise to both the quality and flavor of the food. Appetizers, entrées and desserts are described in great detail, and recommendations are given on which to try if you're having trouble choosing.

Hop over to the review and read up on the great new venture from the Indigo Road Restaurant Group.

Update September 23: Located downstairs from the Cocktail Club, and bearing the one-time name of the alley that ran alongside the building, the Macintosh offers a menu inspired by the American table. With dishes such as pan sautéed trigger fish with fingerling potato confit, Dave’s Clams and arugula pudding sauce, chef Jeremiah Bacon combines his Lowcountry roots with his classic culinary skills.

The Macintosh will offer a variety of items on the menu, ranging from seven-ounce CAB grilled deckel to Border Springs Farm lamb neck ravioli, but will source much of its protein from the waters surrounding Charleston. An avid fisherman who grew up on Johns Island, S.C., Bacon brings his passion for fishing and knowledge of the local waters directly to the menu.

The Macintosh will also hold a “Bacon Happy Hour” with weekly changing bacon-inspired dishes. The happy hour will be held every Monday through Friday from 5 p.m. to 7 p.m. and feature dishes such as crispy pork belly with herbed bread crumbs and an apple cider gastrique.

Update September 19: The Macintosh is set to open this Wednesday, September 21st, with a ticketed preview party to benefit The Gavalas-Kolanko Foundation.

First reporting: The empty storefront at 479 King Street first caught the eye of chef Jeremiah Bacon in 2007, as he envisioned opening a restaurant that would offer elegant homegrown cuisine in the comfort of a neighborhood eatery.

Coincidentally, his future business partner, Steve Palmer, had also been scouting that same location for years, and when the pair teamed up as partners in the Indigo Road restaurant group in November 2010, the pieces fell into place for Bacon and Palmer to open the Macintosh.

Opening this September downstairs from the Cocktail Club, and bearing the one-time name of the alley that runs alongside the building, the Macintosh will offer a menu stirred by the soul of the American table. Bacon will present intriguing dishes such as Burden Creek goat cheese gnuddi with stone crabs and sweet 100s, braised Blue Chip Farms rabbit with slow roasted tomato and ricotta salata, and sweet and sour pork belly soup. His savory bone marrow bread pudding, which he originated at Oak Steakhouse, will also be offered as a side item on the new menu.

“I’m excited to create cuisine that showcases the range of flavors that the Lowcountry has to offer in a way that is both inviting and intriguing to any diner,” Bacon said. “We want to bring upscale, new-American cooking that is accessible and rooted in the spirit of the Southern palate.”

Bacon will continue to oversee all kitchen operations at Oak Steakhouse, as well as regularly cook on the line. Joseph Jacobson, Bacon’s right hand man and Oak’s most tenured employee, will step up as executive chef de cuisine. A beloved and natural presence in the kitchen, Palmer said that he is excited for Jacobson to embrace his enhanced leadership role with the Indigo Road.

“The most rewarding part of opening the Macintosh is that it provides new opportunities for our staff to grow within the company,” said Palmer, managing partner of the Indigo Road restaurant group. “It is because of the solid Indigo Road team we have in place that we are able to open the Macintosh.”

The Macintosh will be open for dinner seven nights a week, and will also offer a late night menu as well as Sunday brunch.