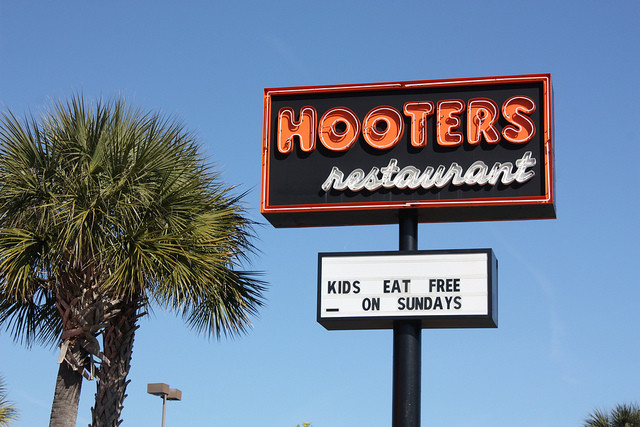 6:22 am on Monday August 6, 2012 | Posted by
Hooters getting facelift, focusing on service, food & broader audience

Hooters is a national chain that has a place in the heart of Myrtle Beach, its founder, Robert Brooks was born in Loris and after success moved back to the beach and passed away of a heart attack in 2006.

While Brooks based his operations out of Georgia, "bought expansion and franchise rights for the Hooters chain and eventually getting majority control and chairmanship of the organization." he always kept South Carolina in mind. Donating money to both Clemson and Coastal Carolina University. From 2004-2006 Hooters Air called Myrtle Beach its home and offered cheap flights all over the east coast and parts of the mid-west.

After Brooks' death in 2006 the company started changing. Their first order of business was to offer a full bar. Before Hooters only offered beer and wine. And last Thursday, August 2nd the companies continued evolution was discussed with Nation's Restaurant News.

Hooters is calling it, Hooters 2.0 and late last year remodel the original Hooters restaurant in Clearwater, Florida. They plan to remodel all of their 430 locations over the next few years, hoping to do 20 to 25 locations a year. Restaurant News spoke with chief executive Terry Marks, who joined Hooters with his team in late 2011 and is quoted as saying:

“People want any reason to engage or re-engage with the brand,” said chief executive Terry Marks, who came aboard with his executive team in late 2011. “It’s highly thought of, and our unaided awareness is among the best. But the food had not kept pace over time. We had real opportunities with the food and the Hooters Girls’ hospitality.”

Hooters 2.0 will still feature the Hooters girls; however, they won't be the restaurants main focus in advertising. Now, they want Hooters to become more than just the grandfather of the "breastaurant," which has become a crowded space with a few, not as big, establishments like, Twin Peaks and the Tilted Kilt.

Another component of Hooters 2.0 is a menu overhaul, don't worry, the classic Hooters wings will still be there but now they will be accompanied by 20 new sauces. For now, most of the food items are still being tested but some have already been implemented. Some of those new items include salads, which we're sure is one of the focuses in bringing in more women.

As part of the re-branding effort, Hooters enlisted a well known comedy writer/director, Jody Hill for their new TV ad campaign. Hill is best known as one of the co-creators of HBO's Eastbound and Down (another part of this story that has a #MYR connection). The ads feature two owl puppets, one is an angel on your shoulder the other a devil, NBC reports that the puppets represent:

...the internal dialogue that goes on in a consumer's mind when debating whether to dine at Hooters. "It really is the conversation you always have (about Hooters)," Mr. Cottrell said, adding that often people don't know how to broach the subject of going to Hooters with friends, coworkers or even spouses. "We wanted to bring this out to the forefront and just talk about how fun this is."

Their hope is to show that dining at Hooters is more than just gawking at half dressed, pretty girls.

Make sure to hop over to Nation's Restaurant News for their full write-up with a lot more details about the re-branding of Hooters. And head on over to NBC to learn more about the Hooters2.0 advertising strategy.

There is no word yet when our local Hooters will be getting the remodeling, but we'll keep you posted.